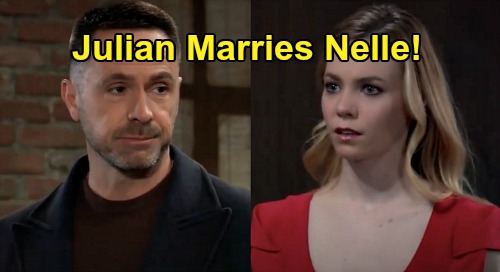 Nelle will use that secret to benefit her as she prepares for court, but Michael Corinthos (Chad Duell) and Willow Tait (Katelyn MacMullen) will have a plan of their own in the works. It looks like Nelle will find out they’re getting married, which means Michael will have an advantage going into this custody battle.

Of course, Nelle won’t stand for that! We have to think about how Nelle’s mind operates. When Nelle finds out Michael’s bringing a new wife to the table, she may determine that she has to bring a new husband, too.

General Hospital spoilers say Nelle will work to even the odds before this hearing. It seems like the only way to even things out would be getting married herself. The only person who’d marry Nelle right would have to be blackmailed into it.

As luck would have it, Nelle will be in a position where she can force Julian to do whatever she wants. We should note that Julian is no Willow in terms of being a respected member of the community.

However, Julian’s a step up from Shiloh, so there’s that! Plus, Martin Gray (Michael E. Knight) has a knack for spin and might be able to create a compelling story for the judge.

Julian turned his life around after his prison stint was over – at least as far as the public’s concerned. He settled down with a simple bar and gives the people of Port Charles a place to get some grub.

GH fans know Julian has still been doing shady things like keeping the baby switch under wraps and trying to murder Brad Cooper (Parry Shen), but the judge won’t know that.

Nelle may count on “Marty” to argue that she’s just like Julian – a town pariah who just wants a simple life. Martin could play up the angle of Julian being Wiley Quartermaine-Corinthos’ (Erik and Theo Olson) former grandpa as well – a grandpa who was left heartbroken by Brad, who duped Lucas Jones (Ryan Carnes). Nelle can act like that’s how they came together: as victims of Brad’s deception.

It wouldn’t be true, but not much is when it comes to Nelle! Naturally, we can’t ignore the fact that Julian’s old enough to be Nelle’s father. This would be a weird marriage for sure, but it all fits with where GH writers seem to be headed.

Nelle will likely want to even the score after Michael offers a two-parent home, so Julian may become her husband and Wiley’s stepdad! We’ll keep you posted on other GH news and updates. Do you think Nelle and Julian will marry?