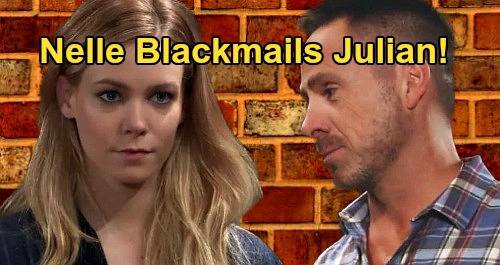 GH viewers can expect Nelle to get riled up – and an angry Nelle is a dangerous Nelle. She also happens to be quite the opportunist, so Nelle’s knack will be on full display during the week of May 11-15. General Hospital spoilers state that Nelle will do some eavesdropping.

That’s becoming a very useful habit of Nelle’s since she recently listened in on Nina Reeves (Cynthia Watros) conversation.

Nelle immediately sensed the chance to score a courtroom ally, so she took advantage of it. Although Nina hasn’t agreed to speak on Nelle’s behalf yet, she also didn’t say no! In Nelle’s book, that’s practically a yes. Even so, Nelle will feel like she’s going to need more ammo going into this custody battle.

That’s where eavesdropping will once again prove beneficial to Nelle. General Hospital spoilers say Nelle will overhear some crucial info about Julian. It sounds like Nelle will find out Julian was heavily involved in the baby swap cover-up.

Nelle may also discover that Julian tampered with the brakes on Brad’s car, which nearly caused Lucas Jones’ (Ryan Carnes) death by mistake.

Regardless of exactly how much Nelle learns, she should know enough to form a blackmail plot. Julian already faced Brook Lynn Quartermaine’s (Amanda Setton) threats, but it looks like it’s Nelle’s turn. Nelle never misses a shot at controlling someone and helping herself get ahead in some way.

The question is: How can Julian help? It’s not like Julian’s opinion of Nelle would matter much in court – not like the kind and respected Crimson powerhouse Nina Reeves (Cynthia Watros). Julian’s just a bar owner with a criminal history and a shady reputation. Not to mention he barely knows Nelle.

Instead, Nelle may focus on damaging her opponent. Perhaps Nelle will want Julian’s assistance in targeting Michael Corinthos (Chad Duell) and the rest of the Corinthos clan. No matter what Nelle has in mind, it seems Julian will have to go along with it – at least if he wants Nelle to keep his dark secrets.

General Hospital spoilers say Julian will enter risky territory, so we’ll see how that works out for him. Of course, the same could said for Nelle, who’s dealing with a man who kills as easily as she does.

What’s to stop Julian from snapping Nelle in half? Both Nelle and Julian will be risking a lot by going up against Sonny Corinthos (Maurice Benard), so this is a high-stakes situation all around.

The drama’s about to rev up in Port Charles, so check back for news and updates. GH fans will want to tune in for all of Nelle’s brewing bombshells. CDL’s the place to be for entertaining General Hospital spoilers, updates and news posts.