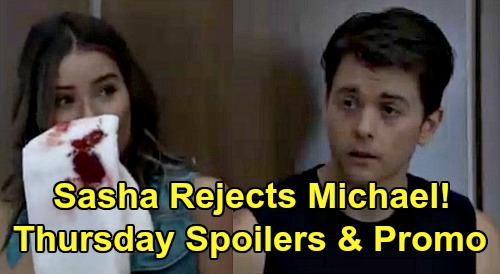 Willow will look confused by what Finn’s getting at, but Finn may soon realize Chase didn’t go through with it. Chase couldn’t bring himself to come clean about the faux affair, so that’ll leave Finn in a tight spot. Although Finn may be tempted to tell Willow himself, he might respect his brother’s wishes. This is Chase’s life, so he’s free to make the dumb decisions he wants to make.

Then again, it’s also possible Finn will try to explain and get interrupted. Either way, Willow probably isn’t going to learn the truth just yet. In the elevator, Michael Corinthos (Chad Duell) will show kindness to Sasha Gilmore (Sofia Mattsson) as she holds a cloth on her bloody nose.

Sasha will finally lash out at Michael and push him to stop being so nice. Of course, that’s not in Michael’s nature! When Michael sees a damsel in distress, his instinct is to rescue her. Even though Michael thinks Sasha betrayed him, that doesn’t mean he stopped caring or can forget what they had.

General Hospital spoilers say Michael will make a life-changing choice on Thursday, which probably involves moving forward with a Willow marriage. Michael and Willow will have to act fast, but they’ll likely feel this is the only way to defeat Nelle Benson Archer (Chloe Lanier) in court.

Wiley Quartermaine-Corinthos (Erik and Theo Olson) is what’s most important, so Willow and Michael will put him first as always. Over with Nelle, she’ll remain confident that she got through to Nina Reeves (Cynthia Watros) and will get the help she needs.

Julian Jerome (William deVry), on the other hand, certainly won’t be helpful to Nelle when she appears at Charlie’s Pub.

General Hospital spoilers say Julian will insist that Nelle’s “done here,” so he won’t want her in his bar or in his face anymore. As far as Julian’s concerned, Nelle should stay as far away as possible.

Julian definitely doesn’t trust Nelle – and Trina Robinson (Sydney Mikayla) doesn’t trust anything to do with Jordan Ashford (Briana Nicole Henry) either. Trina will make that crystal clear as she rants to her mom.

Portia Robinson (Brook Kerr) will probably urge Trina to settle down, but Trina will still be upset about the way Jordan turned on her former team. Marcus Taggert (Real Andrews) had his reputation dragged through the mud thanks to Jordan, so Trina has a good reason to hate her.

Meanwhile, Jordan will battle her nerves as Mac Scorpio (John J. York) drops hints about what he’s learned. Thanks to TJ Ashford’s (Tajh Bellow) clues, Mac’s making progress in the kidnapping investigation. Jordan knows TJ could land in more danger if Mac connects all this to Cyrus Renault (Jeff Kober), so she’ll worry about what Mac’s uncovered.

At the PCPD, Jordan will suggest it sounds like Mac has a theory. She’ll tell Mac to lay it on her, but you can bet Jordan will wrestle with fears about what Mac’s about to disclose. It’s possible Mac has a hunch about Cyrus’ involvement, so we’ll see how all this plays out.

Regardless, Cyrus will be stirring up more trouble on Thursday. At the Metro Court, Laura Collins (Genie Francis) and Carly Corinthos (Laura Wright) will see an irritating sight. By the bar, Cyrus will raise a glass to the ladies and leave them peeved. “You’ve got to be kidding me,” Carly says in Thursday’s GH preview video.

Although Carly has informed Cyrus that he’s not welcome there, Cyrus will continue to make the Metro Court his favorite hangout. However, Sonny Corinthos (Maurice Benard) could take care of that issue for Carly eventually. Down by the docks, Sonny will tell Jason Morgan (Steve Burton) and Curtis Ashford (Donnell Turner) that the plan’s already in motion.

General Hospital fans know Sonny intends to take Cyrus out the first chance he gets. Once Cyrus is no longer looking over his shoulder, that’ll be Sonny’s perfect opportunity to strike. Unfortunately, Cyrus is plotting against Sonny as well and already mentioned taking out Jason. This war could get ugly again soon enough!

"You have got to be kidding me… " #GH pic.twitter.com/1a6reiZIdk