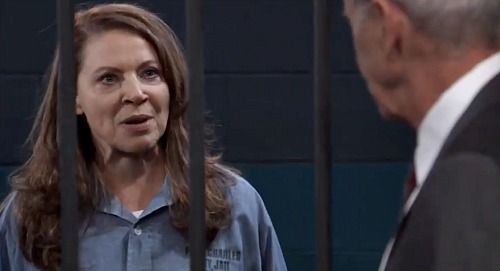 General Hospital (GH) spoilers reveal that one ABC soap star is headed off canvas. GH fans love Kathleen Gati as the always entertaining Liesl Obrecht (Kathleen Gati), but Liesl’s in a serious jam at the moment. Peter August (Wes Ramsey) framed Liesl for his own crimes, so she’s been stewing in lockup while Peter lives his normal life.

On April 13, Robert Scorpio (Tristan Rogers) will show up to deliver some difficult updates. Liesl wants her freedom, but she won’t get it just yet. General Hospital spoilers say Robert will explain the news of Liesl’s transfer. It turns out Liesl’s being shipped off to The Hague, so Gati’s fabulous character will be offscreen for a bit.

Fortunately, this isn’t a forever departure. It’s just a story-dictated exit that’ll give Peter time to stir up more trouble. As Robert closes in on the truth, Peter will be busy creating more problems. He’ll hope that if he distracts Robert, it’ll keep Peter’s secrets buried and Liesl behind bars.

As for Liesl, she’ll fume over the predicament she’s in and push Robert to do something. Robert’s trying, but he can’t help Liesl if she blabs and blows this. After Robert reminds Liesl that her release is at stake, Liesl will agree to go quietly to The Hague and just try to be patient. That’s bound to be tough since patience isn’t Obrecht’s forte!

Before Liesl’s transfer, she’ll get a visit from Maxie Jones (Kirsten Storms). Although Maxie will still be angry over what she believes Liesl did, she’ll shed some tears and manage to say goodbye. GH spoilers state that Liesl will get a little choked up, too. Instead of using this time to drag Peter, Liesl will focus on the farewell and cling to hope for a free future.

Robert will assure Liesl that he’s going to watch out for Maxie and keep her safe from Peter’s plotting. Maxie could be in grave danger if Peter’s track record is any indication, but Liesl will count on Robert to keep his word.

As Liesl prepares to head off, she’ll vow to make a big comeback and reunite with her family. You can bet that’s a promise Obrecht will keep! General Hospital spoilers confirm that Liesl will return – presumably after Peter’s looming downfall.

It sounds like the excitement’s revving up, so stay tuned. Will you miss Obrecht while she’s gone? Are you looking forward to Peter’s exposure? CDL will have other scorching General Hospital spoilers, updates and news, so don’t forget to stop by again soon.