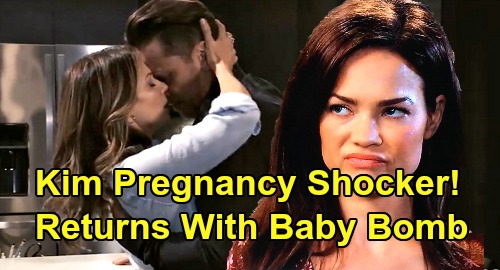 General Hospital (GH) spoilers tease that Franco Baldwin (Roger Howarth) and Elizabeth Baldwin (Rebecca Herbst) have more hurdles ahead of them. Although the memory reversal procedure was a success, the ghost of “Drew Cain” could get in their way!

Franco was horrified when Liz revealed that he’d slept with Kim Nero (Tamara Braun). He was eager to confront Kim, but Liz informed Franco that he couldn’t since Kim had left town. So we have to wonder…why did GH write Kim out when they did? Why not keep her around for this inevitably confrontation with Franco and then send her off canvas?

It seems like General Hospital writers missed an opportunity for drama, but maybe they simply sacrificed short-term conflict for a bombshell down the road. GH fans will recall an odd scene just before Kim left Port Charles.

Hayden Barnes (Rebecca Budig) came over to rent Kim’s old apartment, which was weird since GH would go on to write Hayden out and not show her living there at all.

So again, we have to wonder what the point was. Perhaps it was to deliver a couple clues to General Hospital viewers. Hayden suggested some wine, but Kim decided not to partake. She also dropped a stuffed animal on the floor, leading Hayden to acknowledge that Kim was a mother.

On the surface, it seemed like Kim was in a hurry to leave and in pain over the reminder that she lost Oscar Nero Quartermaine (Garren Stitt). Could there have been more to it than that?

It’s possible that was indeed an old plushie of Oscar’s, but what if Kim purchased something for an impending bundle of joy? That would also explain why Kim declined to partake of alcohol.

Maybe the reason Franco can’t confront Kim right now is that GH wants to preserve a pregnancy secret. After all, Kim was desperate to have Drew Cain’s (Billy Miller) baby. She didn’t make a kid with the real Drew, but did she manage to conceive with the fake one? It’s an option to consider, especially based on some 2020 preview info.

In a recent issue of Soap Opera Digest, Co-Head Writer Dan O’Connor had an intriguing hint for “Friz” fans. “It seems to be a happily ever after for Elizabeth and Franco, but even though Franco is back, there are other complications that have arisen from this ordeal that may have ramifications for this couple for some time,” O’Connor said.

If Kim returns with Franco’s baby later in the year, that’d back up this idea. It would also line up with what Tamara Braun told SOD about her exit. She mentioned that she was promised a big story, but she soon received word that she was being written out instead. Perhaps GH simply chose to let a pregnancy play out offscreen in the end.

Of course, there’s always the possibility that Kim could die in childbirth, which would be awfully tragic considering Drew and Oscar both met grim fates. Even so, it would be interesting for Liz and Franco to raise this potential baby together.