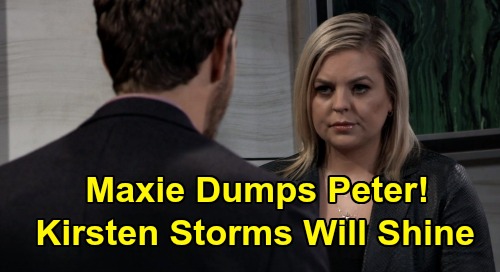 General Hospital (GH) spoilers tease that Maxie Jones (Kirsten Storms) is in for a rude awakening when it comes to Peter August (Wes Ramsey). Despite the suspicions surrounding Peter and this bizarre Liesl Obrecht (Kathleen Gati) setup, Maxie just can’t see what’s right in front of her. Like Jason Morgan (Steve Burton) pointed out, you can’t make somebody believe who doesn’t want to believe.

Maxie indeed doesn’t want to believe Peter’s guilty. She thinks Peter’s a changed man and intends to build a life with him. Maxie envisions a bright future with Peter and James West, but that’s all about to go up in smoke.

General Hospital spoilers say Peter’s luck will eventually run out, which will lead to his exposure and inevitable downfall.

Of course, many fans are looking forward to that for several reasons. Peter obviously deserves to pay for his deadly actions, but this will also free Maxie from a love story that’s never really worked. This whole “Paxie” thing has arguably been a flop from the start – not to mention it was always kind of disrespectful to Nathan West (Ryan Paevey).

Peter was ultimately the reason Cesar Faison (Anders Hove) killed Nathan. GH fans can’t forget how Peter visited Faison at GH and gloated about him shooting the wrong son. Since Peter’s now framing Liesl – someone Maxie cares about a great deal – he’s proving that he doesn’t love Maxie in the way he should.

General Hospital spoilers say Maxie’s world will eventually come crashing down. She’ll realize almost everything she thought she knew about Peter has been a lie. How will Maxie react when the truth’s finally exposed?

Maxie’s bound to be devastated and furious, so Kirsten Storms will truly have a chance to shine. She was excellent after Nathan’s death, but she’s long overdue for more dramatic scenes.

In addition to Storms’ moment in the sun, this will give Maxie an opportunity to move into other storylines and eventually get a better love interest. Breaking free from Peter will give Maxie a fresh start – a much-needed reboot that many General Hospital fans have been asking for. This character could use some updates after this Peter fiasco, so her looming heartache is actually good news.

Are you eager to see Kirsten Storms’ performance after the Peter reveal? Do you hope Maxie finds true happiness down the road? It sounds like some wild GH drama’s brewing thanks to Peter’s exposure, so stay tuned. Stick with CDL for other General Hospital spoilers, news and updates.