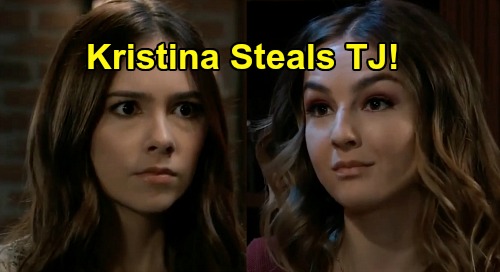 General Hospital (GH) spoilers reveal that Molly Lansing-Davis (Haley Pullos) was right about one thing when she faced off with Kristina Corinthos-Davis (Lexi Ainsworth). GH fans will recall that Kristina snapped and went off on Sam McCall (Kelly Monaco) in a big way. Kristina felt like Sam and Jason Morgan (Steve Burton) were “danger junkies” who couldn’t handle it if there wasn’t drama.

That led Molly to defend Sam and argue that Kristina was in no position to judge. Molly pointed out that Kristina hasn’t had a successful relationship in her life, which seems fair to say.

Of course, Molly also argued that Kristina was jealous of “JaSam,” which may or may not be true. Either way, Kristina has had a string of unsuccessful romances and that needs to change.

Molly’s entering a domestic partnership with TJ Ashford (Tajh Bellow), but she’s keeping a huge secret from him. General Hospital viewers know Molly slept with Brandon Corbin (Johnny Wactor) while TJ was stuck in captivity. Molly didn’t have all the facts and now regrets her mistake, but the damage is done – especially since Molly’s keeping her mouth shut instead of coming clean.

TJ and Molly are both people who value honesty and trust in a relationship. This couple seems doomed to blow up in a big way, so TJ could find himself single down the road.

We’ve also got perpetually single Kristina, who desperately needs a love interest. Kristina is into both guys and gals depending on who it is. Should GH let Kristina start something up with TJ after the cheating scandal is exposed?

General Hospital writers just set up some love-related conflict between Molly and Kristina, so there’s the potential for it to go somewhere. Plus, we know soaps like to keep things in the family when it comes to love interests! A lot of sharing happens between siblings and even their parents.

Since GH might be building toward Molly and Brando as the couple to root for, should they give TJ a chance at romance with Kristina? It’d be pretty soapy if TJ dumped Molly and ended up with Kristina – particularly after Molly went on that rant about Krissy never having any successful relationships.

It’d bring some great drama if Kristina and TJ got together or at least hooked up.

After all, Kristina literally said she wants the kind of relationship like Molly has with TJ. Why not just let Kristina swoop in and steal Molly’s man? It’s not like there are a ton of options for Kristina on canvas, so it might be an interesting way to take things.

Should GH rev up the sister tension by pairing Kristina with TJ? Could you get on board with that after Molly’s Brando secret explodes? As other news becomes available, we’ll deliver updates.