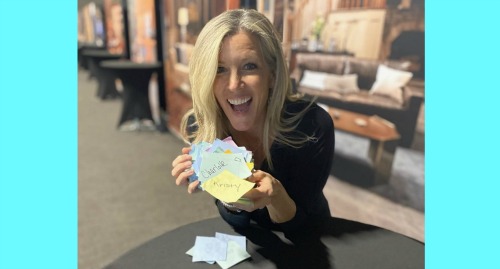 General Hospital (GH) spoilers tease that one ABC soap star is feeling grateful, so she’s spreading the news! On Instagram, Laura Wright (Carly Corinthos) had a heartfelt message to her many supporters. GH viewers might’ve heard about the recent fan event at Graceland. While Wright was there, she was overwhelmed by all the people who came out to meet her.

In fact, Wright was so touched that she saved a little reminder of each person in line. She revealed that she kept a post-it note with the name of each fan – and she showed off the post-it pile in a fun pic. Wright was amazed at how many GH watchers took time out of their busy schedules join in this event.

“This picture fills me with so much gratitude…..” Wright said. “I kept every post-it that had the name of every fan who chose to wait in line for an autograph picture and to take a photo with me — our time is very precious…. please know I am so grateful you chose to spend your afternoon waiting and hanging with me !! #forevergrateful #GHBaby #Graceland #timeisprecious…”

Several other soap stars chimed in with sweet comments. “I love this,” Courtney Hope (Sally Spectra on The Bold and the Beautiful) said. Finola Hughes (Anna Devane) backed Wright up on the idea that “#timeisprecious.” Anthony Montgomery (Andre Maddox) posted a heart emoji to show fans some love as well.

Wes Ramsey (Peter August) is Wright’s fellow cast member on General Hospital, but he also happens to be her boyfriend. Ramsey posted a couple of praying hands emojis and a heart to show he’s thankful, too. It’s clear fans matter a great deal to many soap stars, so it’s nice that they appreciate everyone who supports the genre.

General Hospital spoilers say some fantastic twists and turns are brewing in Port Charles. Several action-packed episodes are coming up – and they’ll set up some major story shockers. GH viewers won’t want to miss the aftermath of those wild shootouts.

Nelle Benson Archer (Chloe Lanier) also has plenty of schemes cooking, so there’ll be no shortage of drama in the weeks ahead. We’ll give you updates as other GH details emerge. Stay tuned to the ABC soap and don’t forget to check CDL often for the latest General Hospital spoilers, updates and news.

This picture fills me with so much gratitude….. I kept every post-it that had the name of every fan who chose to wait in line for an autograph picture and to take a photo with me — our time is very precious…. please know I am so grateful you chose to spend your afternoon waiting and hanging with me !! 🙏🏻❤️#forevergrateful #GHBaby #Graceland #timeisprecious #GHFansKickAss