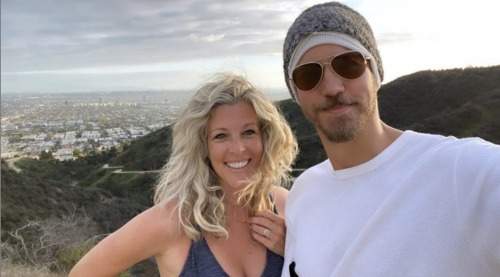 General Hospital (GH) spoilers has some news to pass on about GH and a couple of popular GH stars Laura Wright and Wes Ramsey who happen to be a real-life couple. As you might have heard, General Hospital recently shut down filming for the next four weeks in response to the Coronavirus pandemic. They’ll be on hiatus from March 16th to April 10th, but as a network executive said, they don’t expect an interruption in the broadcast of original episodes.

Shortly after the announcement was made by ABC, Wes Ramsey, who portrays Peter August on the show, sent out a reassuring tweet to his followers. About the show suspending production, he said: “Don’t worry. This is simply #GH falling in line with the safety precautions everyone everywhere is taking. Life in Port Charles will continue. #StaySafe.”

Wes’s girlfriend, Laura Wright, who portrays Carly Corinthos on GH, retweeted his message, and she offered a couple of updates on her social media feeds about what she has been doing to fill her days during this time of social distancing.

It looks like Laura would certainly recommend the book to her fans, and to anyone who needs something to do in lieu of being out and about in public. Of the book, she said: “Ok so I just finished Untamed and it took me longer than expected…I cried a lot. Re-read a lot. Sat in awe a lot.”

Laura Wright continued: “The truth in these pages…the honesty…the permission to own the Cheetah inside of you is truly transforming!!!!! THANK YOU @glennondoyle !!!!!! UNTAMED is out today – you’re gonna want to get a few — it’s the best gift you can give a fellow Cheetah!! #HellYeah #UnTamed #WeCanDoHardThings #love #grateful.”

Of course, if you’re fortunate enough to follow Laura Wright and Wes Ramsey on social media, then you’ll probably see more updates about what they’re up to during the four-week GH shutdown. The good news is that everyone is staying safe, and that’s the most important thing.

We’ll be sure to keep you informed of additional news on Coronavirus COVID-19 soap shutdowns and news on GH and the other soaps as it comes in. Stay tuned to General Hospital and remember that CDL is your source for the latest GH spoilers and updates.

We got outside!!!! Felt so good !! Happy Sunday evening !!! Xoxoxo #wr #wekeptourdistancefromothers #coronavirus