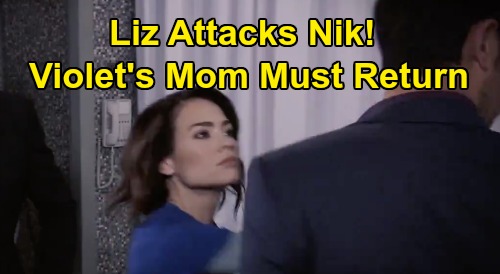 General Hospital (GH) spoilers tease that Elizabeth Baldwin (Rebecca Herbst) will face a flood of difficult emotions. GH viewers know Liz recently reunited with Nikolas Cassadine (Marcus Coloma). She was upset since Nik neglected to tell his loved ones he survived, but she softened quickly. Liz was just so grateful and relieved to see Nikolas alive.

After Liz admitted she wasn’t sure whether to slap Nik or hug him, Nikolas smiled and suggested he’d take the hug. However, Nikolas will have to take the slap soon as well! He already got one from Laura Collins (Genie Francis), but this time it’ll be Liz who delivers the smack – and for a different reason.

During their last chat, Nikolas didn’t mention that he drove Hayden Barnes (Rebecca Budig) out of town. General Hospital fans will recall that Nik’s dirty trick convinced Hayden to go into hiding. She believed there was genuine danger, so she walked away from Violet Barnes (Jophielle Love) out of love.

Hayden wasn’t willing to stick around and drag her daughter into the chaos. She felt she was making a sacrifice for the safety of her child, but Nik was the one behind the “peril.” Now Hayden’s off the grid and poor Violet doesn’t have her mommy.

Of course, Liz doesn’t have her sister in Port Charles either, so she’ll fly into a rage when the truth comes out. General Hospital recently put out an exciting promo, which features the slap we mentioned. Liz will put some power into this! She’ll whack Nik good and surely leave a mark with the force of it.

Liz will then launch a verbal attack to go with this physical one. She’ll be livid with Nikolas for putting the Cassadine estate and all this codicil business above everything else.

Nik keeps insisting that everything he did was for Spencer, but what about Violet? What if Hayden can’t be found? Violet could grow up without her mother, but that’s just not going to work for Liz.

You can bet Liz will start making some fierce demands. She’ll most likely tell Nik that he’d better get Hayden back to PC or else! There’s only so much Nik can do, but at least all the outrage will give him extra motivation.

Hamilton Finn (Michael Easton) will also be on Nikolas’ back about bringing Hayden home, so let’s hope Nik can play the hero since he already played the villain. It sounds like the hunt for Hayden will rev up, but will any clues surface? Will Rebecca Budig return – even if it’s just for an exit with more closure?