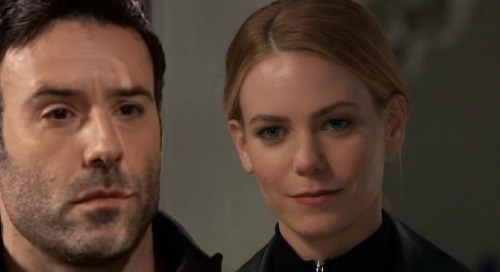 General Hospital (GH) spoilers tease that Nelle Benson Archer (Chloe Lanier) is bound to hit some snags in her latest mission. So far, everything’s pretty much been going according to plan for Nelle. In fact, things may even be working out better than she expected!

GH viewers know Nelle put a plot in motion by marrying Shiloh Archer (Coby Ryan McLaughlin) with the intention of scoring his ELQ shares. Nelle scored her freedom as well and now intends to take back “Wiley Cooper-Jones” aka Jonah Corinthos (Erik and Theo Olson).

Michael Corinthos (Chad Duell) wants to keep his enemies close, so he invited Nelle to move in the Quartermaine mansion.

Although Nelle wants to be close to “Wiley,” she’s undoubtedly loving the idea of moving in the Q manse and stirring the pot. Nelle’s brimming with confidence, but there are several threats that could trip her up.

There are the usual suspects like Michael and enraged Carly Corinthos (Laura Wright), who clearly thinks she can handle Nelle this time around. There’s also Valentin Cassadine (James Patrick Stuart), who’s working on a plot of his own.

Nelle doesn’t realize Martin Gray (Michael E. Knight) is actually working for Valentin, not her. Martin’s loyalty is to Valentin and Valentin alone.

However, none of that seems like enough to really stop a manipulative gal like Nelle. Even when Nelle isn’t one step ahead, she can come from behind with a shocker.

Nelle’s always got a few tricks up her sleeve, so General Hospital needs to deliver a true bombshell. Something that Nelle – and GH fans – would never see coming!

Nelle’s whole plot hinges on being Shiloh’s widow. That’s why she’s been able to go after the ELQ stock and may be the angle she takes with “Wiley.” If Nelle tries to get custody as Shiloh’s widow, she won’t have to reveal the baby swap and could stay out of prison.

That sounds like a tough task to pull off, but it’d be no problem with a Dawnie judge. The power of DoD lingers, which brings us to a startling idea. What would be the one thing that would really throw Nelle for a loop? What if her dead husband isn’t so dead after all?

If Shiloh were to show up alive and well, that’d be quite the dilemma for Nelle.

Willow Tait (Katelyn MacMullen) identified Shiloh’s body at GH, but was he as deceased as he seemed to be? It’s probably just a coincidental flub, but McLaughlin visibly took a big breath during that scene.

There have been wilder back-from-the-dead stories, so there’s no reason Shiloh couldn’t return. If the coroner and other crucial key players were Dawnies, this isn’t that farfetched.

After all, Sam McCall (Kelly Monaco) was adamant that Shiloh needed to stay dead and buried. There were similar comments at Shiloh’s memorial service. Everyone’s so glad Shiloh’s gone for good, which could be a hint that he’s not really!

Wouldn’t it be amazing to see the look on Nelle’s face? If Shiloh literally comes back to haunt her, that’d certainly be a curveball Nelle couldn’t have anticipated.