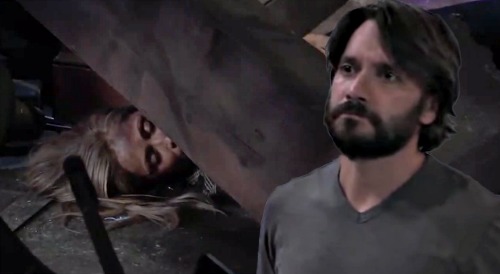 General Hospital (GH) spoilers tease that Emme Rylan will exit as Lulu Spencer soon, so the recent explosion will certainly play a role in why that happens. Lulu will be in bad shape following the blast at The Floating Rib, where Dustin Phillips (Mark Lawson) will regain consciousness and freak over Lulu’s condition.

Likewise, Dante Falconeri (Dominic Zamprogna) will panic when he sees Lulu out cold under a beam. It’ll lead to Dante and Dustin working on a joint mission to save Lulu, so their team effort should get Lulu over to GH right away.

Unfortunately, that doesn’t mean Lulu will survive. She certainly won’t get her happily ever after with Dante or even Dustin for that matter. Lulu won’t be around to pursue a future with either man. However, it’s possible Lulu will get a heartfelt reunion before she goes.

General Hospital fans know Dustin proposed to Lulu before the explosion, but she wasn’t able to give him her answer. Of course, Dustin doesn’t know what Lulu admitted to Laura Collins (Genie Francis) shortly before his arrival. Lulu is still in love with Dante, so things are definitely complicated.

If Portia Robinson (Brook Kerr) reveals that the end is near for Lulu, could that lead to a deathbed wedding? If so, it doesn’t seem likely Dustin would be the groom! Dustin may have popped the question, but it’s Dante who’s still Lulu’s husband in her heart.

It’d bring some bittersweet moments if Dante decides to propose to Lulu again and remarries her on her deathbed. Although this would be a tough pill for Dustin to swallow, Dustin’s feelings aren’t going to matter much if Lulu is dying. All that’ll matter is giving Lulu what little bit of happiness she can get.

It’s not like Dustin’s going to get a future with Lulu anyway, so he’d probably be fine stepping aside for this heartbreaking “Lante” reunion. At his core, Dustin truly seems like a good guy. It’s hard to imagine Dustin causing any real issues if this is what Lulu wants.

Could there be some “Lante” nuptials as Lulu dies in her hospital bed? CDL will have lots of other fantastic General Hospital spoilers, news and updates for you, so drop by often.