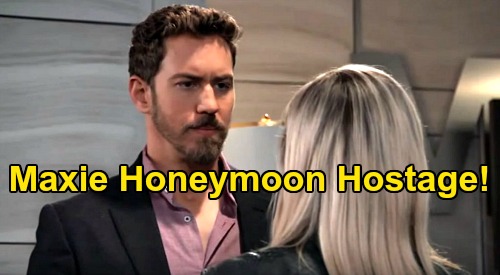 General Hospital (GH) spoilers reveal that Maxie Jones’ (Kirsten Storms) pregnancy will strengthen Peter August’s (Wes Ramsey) desire to build a future with her. Peter’s well on his way since he lives with Maxie and helps her out with James West (Caleb and Kyler Ends). They’re one big happy fam – at least on the surface.

However, things are rarely that simple on General Hospital. Peter’s dark secrets will catch up with him down the road, but let’s talk about what’s going to happen first. We know there’s already been some marriage talk for Peter and Maxie. Peter definitely plans to propose at some point, so it’s safe to say that’ll indeed happen.

Once Peter realizes Maxie’s pregnant, you can bet he’ll be thrilled. Peter will also realize just how important it is to make sure he never gets caught! He won’t want Maxie or anyone else discovering all his terrible transgressions. Peter will hope to remain a free man so he can raise his child and keep up this charade of being perfect for Maxie.

The pregnancy news may prompt Peter’s proposal along with a quick wedding. Will Maxie and Peter get married before Peter’s exposed as a dangerous criminal? If so, it’d give Peter an excuse to leave Port Charles with Maxie as the walls close in.

After all, Maxie and Peter would want to take a honeymoon. Although Maxie might protest due to Deception and all the business drama she’s dealing with, it wouldn’t be too hard for Peter to convince her.

Peter always knows how to sweep Maxie off her feet, so he could sell her on the idea of a trip to celebrate their newlywed status – perhaps to a surprise destination like he did on their first real date. Maxie may not have a clue where they’re headed when the boards the jet, which could make it tough for anyone to find them.

Peter’s proven that he’ll do almost anything to preserve his shot at happiness with Maxie. This baby will up the ante and could lead to some pretty unhinged moments.

GH viewers have certainly seen Peter’s sinister side, so it may be time to unleash it once again. It’s easy to imagine all this building to Maxie becoming Peter’s honeymoon hostage!

Will pregnant Maxie ultimately find herself in need of rescuing? Will Peter go off the rails and put Maxie in danger along with her unborn child? We’ll give you all the latest updates as they become available.