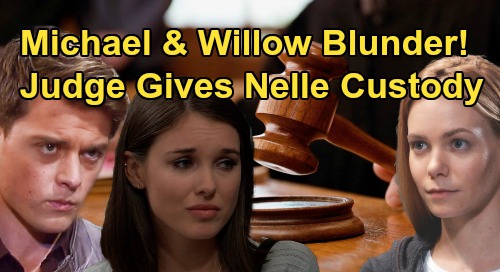 If convincing Michael to marry Willow Tait (Katelyn MacMullen) is the best idea they can come up with to defeat Nelle Benson (Chloe Lanier), then Carly and Sasha aren’t as great at being diabolically devious as they seem to believe they are.

While they’re obviously manipulative, surely they can see that a sudden marriage designed to improve one’s image is just a tad too transparent. GH fans have to ask themselves at this point why Carly and Sasha believe that a marriage to Willow is the best Michael can do to defeat Nelle.

After all, while Michael thinks he can’t marry Sasha because it would hurt his case against Nelle (Sasha committed fraud), what makes any of them believe that Willow’s past is so very squeaky clean?

After all, if Michael marries Willow, Nelle just may be able to bring evidence that Willow slept with her mom’s boyfriend, the leader of the Dawn of Day sex cult! Worse, he impregnated Willow. Then, to top it all off, Willow’s real son died.

Couldn’t Nelle make the argument that Willow has wormed her way into Michael’s life? Couldn’t she argue that Willow went insane with grief and now she’s simply trying to take Nelle’s son from her in a sad, unhinged attempt to assuage her sorrow?

In what world do Carly and Sasha believe that Willow is a white washed, vestal virgin?

GH fans may agree that it would be crazy if a judge ignores the fact that it’s just too convenient that Michael found the love of his life two seconds ago. They may think it would be insane for the court to say “Wow, Willow’s just the perfect mom for Wiley Cooper-Jones (Erik and Theo Olson)!”

This is especially true if the court ignores Willow’s mental or emotional state. GH viewers may agree that Nelle could have an easy go of it when it comes to showing that Willow’s frame of mind may be erratic at best.

In addition to the crazy sex with her mom’s boyfriend (when Willow was initiated into the cult), that same cult leader was responsible for the death of Willow’s dad! Talk about some emotional damage!

Worse, Nelle can argue that after all these horrible events, Willow then had to live through the horror of discovering that her son died of Sudden Infant Death Syndrome (SIDS). Surely Nelle could argue that these facts of Willow’s past are enough to wreck the woman.

The truth is, GH viewers will likely agree that at this point, it’s pushing the bounds of credibility if a judge views Michael’s custody case more favorably following a marriage to Willow. Such an event would also make viewers question just how smart Carly and Sasha really are.

If this Michael and Willow marriage happens, GH fans may need to get ready for Nell to gain custody! Come back to CDL for all your General Hospital spoilers, updates, and news.