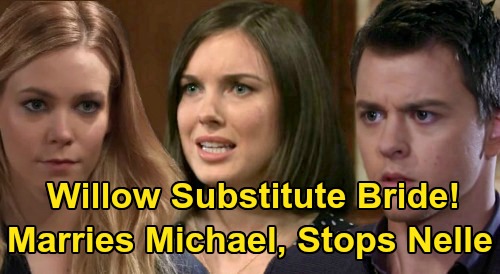 General Hospital (GH) spoilers tease that Michael Corinthos (Chad Duell) may find himself in need of a substitute bride. Diane Miller (Carolyn Henessy) brought up the idea of marriage to Michael as a way to bolster his bid for custody. She suggested that offering up a mother who was preferable to Nelle Benson Archer (Chloe Lanier) might make a difference to the judge.

That eventually led to Michael and Sasha Gilmore (Sofia Mattsson) deciding they should wed, but Diane pumped the brakes after a background check on Sasha. Nelle’s lawyer could tear Sasha to shreds over her fraud and other shady behavior. She’s just not the perfect angel that Diane had in mind.

Diane argued that it’d be better for Michael not to marry unless he can provide a Snow White and Mary Poppins combo, which sounds a lot like someone we know! General Hospital is laying the groundwork for Willow Tait (Katelyn MacMullen) to become Michael’s wife.

There’s no woman in town who’s done more to protect Wiley Quartermaine-Corinthos (Erik and Theo Olson). Willow works with children and broke free from the cult she was forced into. It’d be easy to create a powerful, sympathetic story there. It sells itself because it’s all true.

Willow would indeed make the ideal mother for Wiley. Of course, things will have to get worse before Michael agrees to something like this. He’s in love with Sasha, but there may be some incident or news that leaves him concerned soon.

Whether that’s due to Michael’s mob family or perhaps Nelle’s dirty tricks, we could see some blow that leaves him fearful about winning the case. Willow has vowed to do anything she can to keep Wiley safe – and she knows putting Wiley in Nelle’s hands would be incredibly dangerous.

Since Wiley has to come first, Michael and Willow may agree to a marriage of convenience for the boy’s sake.

What would that mean for Sasha and Harrison Chase (Josh Swickard)? A whole lot of heartbreak for starters! GH has been putting Sasha and Chase in each other’s orbit more and more, so we could be gearing up or a partner swap. Sasha could easily fall for Chase after they bond over their devastation.

Regardless, Chase and Sasha are in for a shock if Willow volunteers as Michael’s fill-in bride. General Hospital spoilers say some twists and turns are ahead in Port Charles, so stay tuned.

As other updates become available, GH will have all the latest details. Stick with CDL for exciting General Hospital spoilers, updates and news.