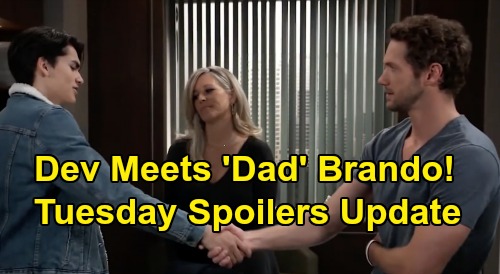 General Hospital (GH) spoilers recap for Monday, February 10, reveal that Anna Devane (Finola Hughes) and Emma Scorpio-Drake (Brooklyn Rae Silzer) enjoyed their morning together at Anna’s place. Once Emma had left the room, Anna immediately quizzed Hamilton Finn (Michael Easton), saying that she needed to know everything about the conversation he had with Sam McCall (Kelly Monaco).

Anna said that she sympathized with Sam losing Drew Cain (Billy Miller), but that she and Jason Morgan (Steve Burton) fixating on Peter August (Wes Ramsey) wasn’t the way to go. Robert Scorpio (Tristan Rogers) arrived and was thrilled to see Emma. Finn took off, leaving his conversation with Anna dangling, and then Robert started in on Anna.

He accused her of lying by omission about Peter to Emma, and he stated that Anna’s got everything but documented proof of Peter’s guilt. He went on to say that Anna was jeopardizing her family, and he wondered what Robin Scorpio-Drake (Kimberly McCullough) would think about all of this, especially given how important Jason is to her. He warned Anna that the collateral damage this time was going to be her family.

Meanwhile, Maxie Jones (Kirsten Storms) and Peter dined at the Metro Court, with Damian Spinelli (Bradford Anderson) suddenly interrupting them. He shared that he will be moving to the area, which overjoyed Maxie but not Peter. Spinelli then started to quiz Peter about when exactly he turned his life around.

Peter talked a good talk and said that everything came to a head when Nathan West (Ryan Paevey) died, and that’s when he knew that everything had to change. He then said that knowing Maxie’s love was the greatest incentive he’s ever known. Undeterred, Spinelli brought up the OR shooting, and then Peter shut down the conversation and left.

Maxie then turned to Spinelli and demanded to know why he was interrogating Peter. She noted that Peter has done everything to change, and that he’s good for her. She told Spinelli that he and Peter didn’t need to be best friends, but that he needed to take a step back. After Maxie left, Spinelli said to himself that Peter’s lying, and he’s got to go.

Back at Anna’s place, the argument between Anna and Robert really heated up, with Anna yelling at Robert to just look the other way and accept the official story – for her son. But Robert refused, and he yelled about Sam and Jason looking for evidence of Peter’s guilt. Just then, Peter arrived at the front door and heard Robert’s words. Anna then threw Robert out, opening the door and finding Peter there.

At Kelly’s, Neil Byrne (Joe Flanigan) bumped into Alexis Davis (Nancy Lee Grahn), and informed her that she was being called to testify in his medical board hearing. Alexis hoped that he’d end up with simply a reprimand, but Neil reminded her that no matter what, he couldn’t pursue a relationship with her for two years.

Alexis said that she was not going to let their relationship ruin his career. Sam then came in and said hello, and Alexis promptly left. Sam wondered what her mom’s hasty exit was all about. Neil explained about the board and how it’s right – that he probably crossed the line first and as he went on, Sam said he was overthinking.

Alexis turned up next at GH, where she chatted with Finn. Finn could tell that something was upsetting her, but rather than talk about her situation with Neil, she mentioned how Jason and Sam were unable to be together, and that she was afraid that Sam would get caught with Jason and sent back to Pentonville. This gave Finn pause, and later he called Sam, saying that he knows something about Peter that could help her.

Next, at Ava Jerome’s (Maura West) gallery, Josslyn Jacks (Eden McCoy) and Trina Robinson (Sydney Mikayla) argued a bit about Ava’s trustworthiness, then talk turned to Cameron Webber’s (William Lipton) sports trip at a college. They noted how much they were looking forward to college, then Dev Cerci (Ashton Arbab) showed up for some advice – he wondered if he should go to the hospital to meet his “father” Brando Corbin (Johnny Wactor).

Josslyn and Trina both said he should stay far away from Brando and let Sonny Corinthos (Maurice Benard) handle it. Dev then took off, with both Trina and Josslyn betting that he went to the hospital, before talk turned to Oscar Nero Quartermaine (Garren Stitt). Trina thought that Josslyn was ready to move on from Oscar, but Josslyn wasn’t so sure.

Over at GH, Brando got a visit from Carly Corinthos (Laura Wright) as he was preparing to be discharged. Carly wanted to know if he knew who she was when he saved her life. He said no, that it was basically a PTSD episode for him – he just ran in and looked for civilians, although he noted that “I’d love to say that it was because you are a beautiful blonde.”

Carly then revealed that she and Sonny knew all about where Brando had been, and talk turned to Brando’s drug use when he returned from service. He ended up going to prison after stealing Gladys Corbin’s (Bonnie Burroughs) paycheck and getting kicked out of her home. When he got out of prison, he went to live with some buddies in Chicago and worked in a bike shop.

Carly wanted to know why Brando had turned up in Port Charles, and he said that he learned about Dev, even though he knows for sure he has no children. He demanded that Carly tell him who Dev was. Carly was honest, saying that Dev is a kid that Sonny wanted to help, and that they had found Brando’s obituary in the local paper. Carly also revealed that Gladys had taken out a life insurance policy on Brando and cashed it in.

At Sonny’s office, he blew up at Jason in frustration over being hit by Cyrus Renault (Jeff Kober). He lamented about being totally exposed and wondered why it had happened in the first place. Jason ran down Cyrus’ business for Sonny, including the big incident with three Russian nationals that led to him being sent to the Federal penitentiary. Sonny noted that Cyrus made a pretty big mistake to get jail time.

Jason then noted that Cyrus clearly wanted the Port Charles area to move drugs through, since there’s the Canadian border and international waters. Sonny said that the only thing standing in Cyrus’ way was him. Sonny told Jason about Cyrus’ negotiation attempt at the prison, and that he had shut the negotiations down, since he doesn’t deal in drugs.

Jason shared that it seemed that Cyrus was planning a test shipment, as his trucking route was suddenly starting to ship things from Seattle to Port Charles. Sonny and Jason surmised that drugs would probably be on board that shipment, and Sonny said that Cyrus was underestimating them. Sonny then sent Jason to the hospital to chat with Brando, because Sonny needed to know what to do with him.

Sonny then called Turning Woods to check on Mike Corbin (Max Gail), only to learn that Mike hasn’t been doing so well since he returned from the trip to Brooklyn. He looked concerned as he told the person on the phone that he was on his way.

Finally, back in Brando’s hospital room, Dev showed up and came face to face with Brando. Carly introduced them and they tentatively shook hands as Jason walked in and beckoned Carly outside the room. There, he asked Carly what was going on between Dev and Brando.