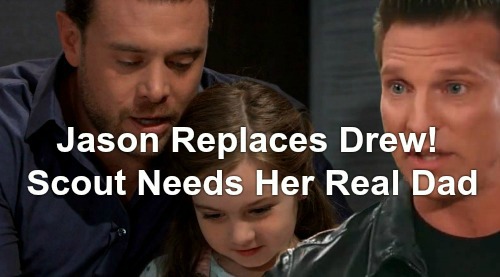 General Hospital (GH) spoilers reveal that a recent line of dialogue has fans questioning what the future holds for Drew Cain (Billy Miller). GH fans know Drew’s exit was left open-ended. Unfortunately, it also happened without much fanfare. Drew simply got on an elevator never to be seen again – at least until General Hospital potentially decides to undo the presumed death that came later.

However, Sam McCall (Kelly Monaco) made a comment that infuriated some viewers and pleased others. Which side you’re on probably depends on whether you’re a Drew fan, a Jason Morgan (Steve Burton) fan or both!

During Sam’s chat with Hamilton Finn (Michael Easton), she admitted that Scout Cain (Ella Ramacieri) doesn’t really ask about Drew anymore. Sam suggested that Scout’s memories of her biological father would fade and all that would be left were stories.

Of course, it led many fans to point out the obvious. Scout doesn’t have to ask questions to get the ball rolling. Sam could easily remind Scout about her dad and find ways to keep his memory alive. That seems like the right thing to do under the circumstances.

Other fans took this as a sign of how Drew would be treated by GH moving forward: faded out and forgotten. Naturally, that suited some viewers just fine and saddened others. “This was a fantastic way of showing how why & what Drew will mean in the future which equals to NOTHING… #drewwho,” one viewer said.

“Sam, you don’t care about Drew. You don’t care about Scout forgetting Drew. Girl, please,” said another. “I had to stop watching the Sam scene,” an irritated fan chimed in. “It made me angry. Then I thought well Scout may not ask you about Drew, Sam, but I bet she talks about him all the time at Monica’s.”

One fan even transferred the father title over to Jason and suggested he was the reason Scout wasn’t asking about Drew. “That’s all because of Jason, her dad,” she said happily. It’s true that Jason’s doing an excellent job as a fill-in dad – and it’s safe to say Drew would approve of that. He would surely want Scout to have a father figure in her life.

Even so, it’s a shame to let Scout forget about Drew entirely. Maybe Sam needs to step up her efforts to spark some memories for Scout and keep them strong. As for the future, Drew’s return can never be ruled out. GH writers don’t seem to be making that a priority based on Sam’s dialogue, but anything can happen down the road.

How do you feel about this whole Scout situation? Is it right to just let Scout forget about Drew? Would you rather just focus on the “JaSam” family unit now? What do you think about GH’s move to totally replace Billy Miller by Steve Burton – even down to his character’s kid?