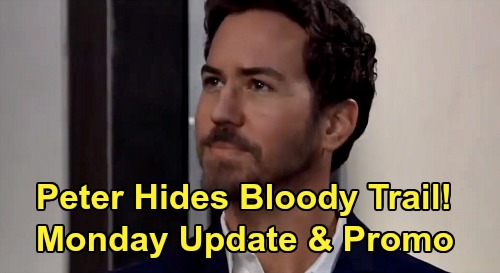 General Hospital (GH) spoilers update for Monday, February 10, teases that Sonny Corinthos (Maurice Benard) will fume over his current situation. Cyrus Renault (Jeff Kober) blew into town and orchestrated a serious three-way attack, so Sonny’s certainly got a reason to flip out. This Pentonville inmate is a force to be reckoned with.

Sonny will have a major outburst in Monday’s episode. He’ll yell about being totally exposed as Jason Morgan (Steve Burton) lets him get it out of his system. Once Sonny’s vented properly, Jason will assure him they’re going to handle this.

There’s no way they’re going to let Cyrus run the show in Port Charles. They just need a bold tactic to work with, so that’s something Jason and Sonny can collaborate on.

Over with Brando Corbin (Johnny Wactor), he’ll be ready for his release from GH. Before Brando’s discharged, Carly Corinthos (Laura Wright) will want to have a little chat with him.

She’ll interrogate Brando about his shady history as well as how much he knew before he came to PC. Carly will ask if Brando knew who she was before he saved her, so we’ll see how he answers that question.

Regardless, Carly will ultimately deem Brando one of the good guys. She’ll think he seems sincere in what he tells her, so she’ll make some arrangements. While Brando’s in town, he can stay in a room at the Metro Court.

This means Spinelli, Elli and Georgie Spinelli (Lily Fisher) will be sticking around, but Peter August (Wes Ramsey) won’t be happy to hear that. He understands that Spinelli and his skills could be a problem for him.

That’s especially true since Spinelli would do anything for Jason and Sam McCall (Kelly Monaco). He’s their right-hand man and a true tech expert, so Peter won’t like the idea of Spin staying and digging around.

Spinelli will prove Peter’s worries are warranted when he starts pumping him for information. He may try to be subtle about it, but Peter will know exactly what’s going on here.

General Hospital spoilers say Peter will opt to leave their small breakfast gathering. Once he’s gone, Maxie will defend Peter to Spinelli. She’ll think Spinelli’s permanent Port Charles move is a chance to help him see the light about her boyfriend. Peter’s as good as gold as far as Maxie’s concerned!

At Anna Devane’s (Finola Hughes) house, she’ll score the details of Hamilton Finn’s (Michael Easton) discussion with Sam. Finn already mentioned that chat, but Anna will want to know anything and everything about “JaSam’s” involvement with Robert Scorpio (Tristan Rogers).

This joint takedown mission will leave Anna terrified and appalled. She just won’t think they need to be fixating on Peter.

Robert will pop in later to see Emma Scorpio Drake (Brooklyn Silzer), who he’ll call a sight for sore eyes. After some sweet family moments, Robert will have to deal with Anna’s wrath.

Anna will rip into Robert for targeting Peter without her knowledge.  Anna will warn Robert to back off, but that’s not something he’ll be willing to do – no matter what he tells her.

Peter will show up on the sly and overhear that Robert’s been plotting with “JaSam.” He’ll play dumb about what he’s learned, but he’ll eventually make a phone call that could change everything. Peter will apparently call in a favor that could help him evade the authorities once again.

However, Finn’s set to betray Anna soon by blabbing about the gunman’s connection to Peter. Jason and Sam will take that info to Robert later in the week, but they’ll get some terrible news in return. That’ll probably be due to the results of Peter’s phone call.

In the meantime, Trina Robinson (Sydney Mikayla) will listen to Josslyn Jacks (Eden McCoy) gripe about Dev Cerci aka “Dev Corbin” (Ashton Arbab). Joss will be frustrated over the mixed signals she’s been getting.

Trina will also get a warning of some sort on Monday. Will Josslyn fret about the mob chaos extending to her friends? That’s a possibility to consider. Then again, Trina may have some bad idea that Joss feels it’s her duty to advise against. At the very least, Josslyn will want Trina to be careful. Meanwhile,

Neil Byrne (Joe Flanigan) will talk to Alexis Davis (Nancy Lee Grahn) about his medical license, which will be revoked unless he fights hard. As part of that fight, Alexis will be asked to testify – and she’ll gladly step up.