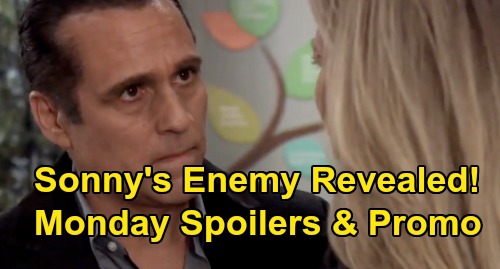 General Hospital (GH) spoilers for Monday, February 3, tease that Dev Cerci aka “Dev Corbin” (Ashton Arbab) will have some questions. He just found out Brando Corbin (Johnny Wactor) – the man who’s supposed to be his “father” – isn’t dead after all. Dev will wonder it means for him now that they know Gladys Corbin’s (Bonnie Burroughs) son is alive.

Although Dev will be worried, Josslyn Jacks (Eden McCoy) will undoubtedly offer reassurance. Things have been pretty chaotic for the Corinthos clan, but Carly Corinthos (Laura Wright) has been trying to get some answers. Gladys hasn’t been too helpful so far, but Carly discovered a photo of Gladys and Dev in Brando’s bag of belongings. Brando was obviously in the loop on his “son” thanks to Gladys.

On Monday, Gladys will visit Brando in his room at GH. She’ll be choked up as she wonders what Brando’s doing in Port Charles. Gladys won’t like the fact that Brando put his life on the line, but Brando will feel it was something he had to do.

General Hospital fans will hear Brando’s side of the story – or at least part of it. Carly may have to work a bit harder if she wants the full version. For now, Carly will grill Sonny Corinthos (Maurice Benard) about what’s going on. She’ll tearfully ask Sonny who this is and why they’re doing this to their family. Your husband’s a mob boss, Carly! Maybe that’s why.

As for the “who” part, Sonny will find out soon enough. General Hospital spoilers say Sonny’s enemy is a man named Cyrus Renault (Jeff Kober), a Pentonville inmate who’s got his guys targeting the Corinthos clan. Cyrus is hoping to challenge Sonny’s position in PC, so we’ll see how that goes for him.

Over with Nikolas Cassadine (Marcus Coloma), he’ll sit by Laura Collins’ (Genie Francis) bedside and admit he knows how much he hurt her with his deception. Now that Nik finally understands that, he’ll fear he might be too late. Fortunately, Laura will be on the road to recovery and will assure Nikolas she still loves him – even if he drives her crazy sometimes!

Next, Willow Tait (Katelyn MacMullen) will lay down the law with Brad Cooper (Parry Shen). She’ll snap that Brad needs to find a way to manage Nelle Benson Archer (Chloe Lanier) or Willow will do it for him. GH viewers know Willow doesn’t mess around when it comes to “Wiley Cooper-Jones” (Erik and Theo Olson).

As for Nelle, she’ll bump into Brook Lynn Quartermaine (Amanda Setton) at the Quartermaine mansion. Brook Lynn will want Nelle to scram, but Nelle will admit that she lives on the property now. She’ll tell Brook Lynn that Michael Corinthos (Chad Duell) invited her to live there, so Brook Lynn obviously isn’t going to approve of that decision.

General Hospital spoilers say Nelle will be stuck out in the boathouse before long, so that’ll provide a little barrier. Even so, you can bet Nelle will stir up plenty of drama for the Quartermaines in the coming weeks. We’ll give you updates as other GH news emerges. Stay tuned to the ABC soap and don’t forget to check CDL often for the latest General Hospital spoilers, updates and news.