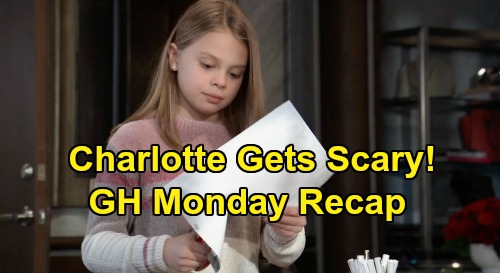 General Hospital (GH) spoilers recap for Monday, January 20, reveal that Spencer Cassadine (Nicolas Bechtel) was surprised to see Ava Jerome (Maura West) show up at his boarding school in France. He made it clear that he wouldn’t have seen Ava had he known she was going to visit, but she said that perhaps he’ll be able to forgive her.

Nikolas Cassadine (Marcus Coloma) then appeared, stunning Spencer. After an emotional embrace, Spencer demanded to know where Nikolas has been all of this time, and he was horrified to hear that Nikolas willingly stayed away. Nikolas tried to explain, but Spencer blew up and declared that he hated him for staying away.

Upset, Nikolas left the room, and when he returned, he promised to make everything up to him, but Spencer wasn’t having it. He blasted his father for leaving him all alone for the past three years and for placing more importance on money than on his own son. Spencer then told his father to stay away from him and left the room.

Meanwhile, Laura Collins (Genie Francis) had a meeting with Jasper “Jax” Jacks (Ingo Rademacher) at the Metro Court. Laura accepted Jax’s apology for not telling her about Nikolas, then asked him to get on board with her waterfront revitalization plan by donating money, which he readily agreed to do.

That sent Michael reeling, which Carly Corinthos (Laura Wright) noticed. She came rushing over and learned the news about Nelle, which horrified her.

Carly then got distracted by Gladys Corbin (Mel Harris), who refused Carly’s gift of a spa day and said that she wanted to go take a tour of the Corinthos Coffee warehouse instead. Carly agreed that they’d go a bit later.

Next, at Crimson, Charlotte Cassadine (Scarlett Fernandez) spent some time with Nina Reeves (Cynthia Watros) working on a picture collage for a school project. Curtis Ashford (Donnell Turner) dropped by to see Nina, and talk eventually turned to Valentin Cassadine (James Patrick Stuart) while Charlotte was out of the room. Curtis offered to look for Nina’s real daughter, but Nina declined the offer.

Later, Sasha Gilmore (Sofia Mattsson) and Willow arrived at the office, as Sasha had been summoned by Nina. Nina wanted to talk business and she told Sasha that she’d partner with Deception, but only if Sasha agrees to a full expose of her life and times, including the fake daughter scam. Sasha agreed, then later wondered if it was such a good idea.

At Brad’s townhouse, he informed Nelle that he decided to take the day off work to spend it with Wiley Cooper-Jones (Theo and Erik Olson). Nelle then wanted to hold her son, which she was doing when Michael and Harrison Chase (Josh Swickard) arrived at the door.

They were horrified to see Nelle with Wiley and Michael grabbed the kid and demanded to know what Nelle was doing.

Ultimately, Michael offered Nelle another living arrangement, to get her out of Brad’s place and away from Wiley. Nelle announced that she had high standards, and Michael said that she’d like the place he had in mind.

Afterwards, Chase wondered whether Michael really thought he did the right thing, and Michael explained that he needed to keep this enemy close.

At the PCPD, Marcus Taggert (Real Andrews) and Jordan Ashford (Briana Nicole Henry) discussed old times for a bit, then Taggert wanted to know why Jordan needed his help.

She showed him a file on Bob Massicotte’s (Randy J. Goodwin) death, and Taggert was shocked that the cause of death was a drug overdose. He agreed to investigate it.

Laura arrived to see Jordan and recognized Taggert from back in the day. Jordan then learned from Laura that Jax is on board with the waterfront revitalization project. Jordan noted that many mayors have tried to clean up the waterfront, and Laura said that she was actually going to do it.

Next, Willow and Sasha went back to the Metro Court when Nelle appeared and introduced herself to Sasha, who refused to shake Nelle’s hand. Nelle announced that Michael just offered to let her stay at the Quartermaine mansion, which Carly happened to hear. Carly naturally assumed that Nelle was lying per usual.

Finally, Jax dropped by Nina’s office to pick something up, and while the two were talking, Charlotte sliced up the Crimson cover with Sasha’s face on it with a pair of scissors.