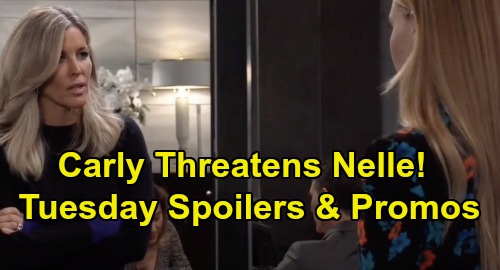 Lulu will find the remnants in Tuesday’s episode and ask Charlotte what happened. Charlotte will likely admit she blames Sasha for ruining her family. She may think back to when things first when wrong for Nina Reeves (Cynthia Watros) and Valentin Cassadine (James Patrick Stuart).

It’s easy to see how Charlotte would consider Sasha the starting point for all the chaos.

Meanwhile, Nikolas Cassadine (Marcus Coloma) will agree to sign Ava Jerome’s (Maura West) post-nup on one condition. He’ll add some stipulation that Ava may not be thrilled about, but she’ll be willing to compromise.

The papers will be signed and Ava will prepare to cough up the codicil, but there’s certainly the potential for betrayals along the way!

Over with Josslyn Jacks (Eden McCoy), she’ll be down on the docks when Michael Corinthos (Chad Duell) appears. After they discuss the Nelle Benson Archer (Chloe Lanier) situation, Joss will make a shocking suggestion.

Josh will contend that Michael should have Willow Tait (Katelyn MacMullen) revoke the adoption and take “Wiley Cooper-Jones” (Erik and Theo Olson) back.

Michael may not be so sure that’s the best strategy, but he’s already got another one in mind. He’s invited Nelle to live at the Quartermaine mansion, which is obviously a risky move.

Even so, Michael would rather keep his enemies close. He intends to let Nelle think she’s winning and then drop the hammer on her when she least expects it.

Of course, Nelle indeed thinks she’s winning and happily gloated to Carly Corinthos (Laura Wright) about it. On Tuesday, Nelle will continue to push Carly’s buttons. She’ll go on and on about Jonah Corinthos until Carly just can’t take it anymore.

Carly will snap that Nelle should mention Jonah’s name one more time and see what happens. She’ll be in no mood to listen to Nelle gush about Michael’s “dead” son.

Other General Hospital spoilers say Willow will fret about Nelle and Brad Cooper’s (Parry Shen) friendship – which is really more of a twisted alliance! During a conversation with Sasha, Willow will wonder how she can be OK with Brad raising “Wiley” on his own.

Whether Michael goes for Josslyn’s revoked adoption idea or not, Willow could certainly be on the verge of considering it.

Across town, Sonny Corinthos (Maurice Benard) will whisper to Jason Morgan (Steve Burton) about something important. He’ll insist there can’t be an incident and add that this has to work.

Sonny may be going over plans for how to handle that mysterious enemy of his. Regardless, a major shootout is coming up later this week – and it’ll end in disaster!