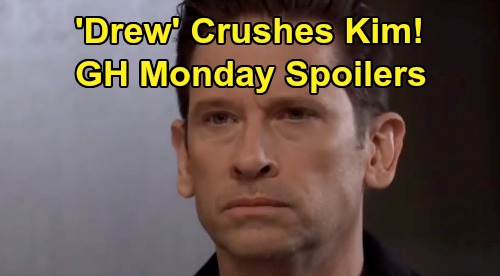 Finn will feel confident he can work it all out with Anna, but Hayden would certainly like to have a reunion with her love. It’ll be interesting to see what’s next in this love triangle. In the meantime, Lucas Jones (Ryan Carnes) will have some updates for Brad Cooper (Parry Shen). He’ll assure Brad that Julian Jerome (William deVry) isn’t going to be interfering in their marriage anymore. Lucas will insist he made sure of that.

Brad will find out that Lucas cut Julian out of his life, so he’ll track Julian down eventually. He may worry there’s some other plot brewing, and that’s certainly a risk when it comes to Julian. General Hospital spoilers say Julian will also get on the phone and keep griping about Olivia Quartermaine (Lisa LoCicero). He’ll snap that Olivia’s attorney needs to get her client under control or he’ll sue them both.

At GH, Alexis Davis (Nancy Lee Grahn) will be confused by T.J. Ashford’s (Tajh Bellow) latest diagnosis. He thinks Alexis may have ingested rat poisoning, so Alexis will be perplexed about how this could’ve happened. Hamilton Finn (Michael Easton) will back T.J. up and insist that it’s true. He’ll wonder who would’ve tried to poison Alexis, so she’ll reflect on some enemies that would have a motive.

However, Kendra Lennon (Michelle Argyris) won’t make Alexis’ suspect list. It’ll be Neil Byrne (Joe Flanigan) who starts putting the clues together later in the week. Until then, Alexis will hope for a cure to these horrible symptoms. Finn will come through for Alexis, but she’s still got some trouble ahead of her thanks to vindictive Kendra.

In court, Diane Miller (Carolyn Hennesy) will fight hard for Sam McCall’s (Kelly Monaco) freedom. During Sam’s bench trial, Diane will insist this was a clear case of self-defense. She’ll do everything she can to convince the judge that Sam should walk free, but Sam’s upcoming verdict may not be the one she wants.

Across town, General Hospital spoilers say Kim Nero’s (Tamara Braun) dreams will be dashed. “Drew Cain” aka Franco Baldwin (Roger Howarth) is battling guilt over the life he’s inadvertently stolen. He’s starting to understand that all this belongs to Franco, not him. That’s not what Kim wants to hear, but she’ll just have to accept it.

Kim will wonder if “Drew’s” ready to start their new life together in San Diego. Sadly, “Drew” will admit it’s not going to happen. Franco deserves an opportunity to reclaim his life, so he looks like “Drew” will stick around and make plans for the memory procedure soon.