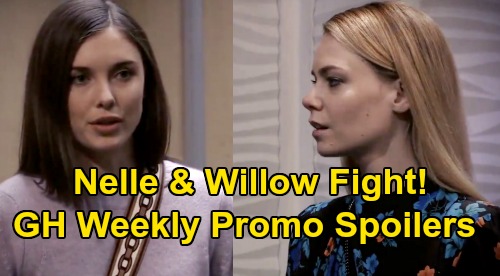 General Hospital (GH) spoilers tease that we’re in for a big week including a major reunion, a possible new romantic chapter, and a couple of explosive conflicts. The new GH weekly preview deals with all of this and more. We’ve dealt with some other aspects of the promo in a separate post, since this promo is loaded with action. Here, we address the more interpersonal aspects of the promo, so let’s get right into it!

First off, the promo shows some intense scenes from a major reunion that GH fans have been waiting for – the reunion of Nikolas Cassadine (Marcus Coloma) and Spencer Cassadine (Nicolas Bechtel). AS GH viewers will remember, Nikolas and Ava Jerome (Maura West) are headed to France to see Spencer, so that Nikolas could tell him that he’s alive and well.

Unfortunately for Nikolas, Spencer isn’t going to have the happy reaction that he’s hoping for. Of course, at first, Spencer will probably be overjoyed to know that his father isn’t dead, but he’ll have some big questions and concerns.

The weekly preview shows a furious Spencer blasting his dad for letting him believe that he was dead for three years. Worse, he tells Nikolas that he’s just as heartless as Valentin Cassadine (James Patrick Stuart).

Nikolas is clearly blown away by Spencer’s reaction, especially when Spencer tells Nikolas to stay away from him, which he’s shown doing in the promo. Of course, three years makes a huge difference in kids of Spencer’s age, and he’s not the little boy that Nikolas remembers – he’s growing up fast and is capable of feeling complex adult emotions like betrayal and rejection.

At any rate, it looks like Ava will step in and try to get Spencer to reconsider and reconcile with his father. She’s shown in the promo emphatically telling Spencer to put his anger aside and let his father love him again.

Realistically, though, it’s probably going to take some time for Spencer to come around – after all, this is a serious shocker for him and it would be a lot for anyone to work through, let alone a teen.

Next, the promo addresses the efforts of Valentin to try to get back into the good graces of Nina Reeves (Cynthia Watros). He’s probably hoping that after a little time, Nina will come around and realize that she really wants to be a happy family with Valentin and Charlotte Cassadine (Scarlett Fernandez). He’s shown in the promo asking Nina if she’ll just put her anger aside.

But Nina indicates that there’s really nothing left to say, prompting Valentin to profess his love for Nina once again. However, something tells us that Nina is ready to move on with her life and put the Valentin chapter behind her.

She’s just been hurt too many times by him, plus, it looks like she’ll have another man actively pursuing her – Jasper “Jax” Jacks (Ingo Rademacher).

Now that Nina is no longer with Valentin, it appears that Jax will make his affections for Nina known. Jax is shown asking Nina for an impromptu dance, which she happily accepts.

The two dance together and Jax is shown learning in for a kiss – we’ll see if they actually do kiss or if something gets in their way at the last minute. Something tells us that Valentin may make it exceedingly difficult for Nina to move on.

In addition to having to deal with Nina moving on with Jax, Valentin’s going to have another problem on his hands, as Lulu Spencer (Emme Rylan) will gear up for a big custody fight with him.

Lulu is out for blood, and she’s serious about fighting Valentin for sole custody of Charlotte. She’s shown in the promo telling Valentin that she’s about to file a restraining order against him, which he of course doesn’t appreciate.

He tells Lulu to “bring it,” which it looks like she absolutely will. Of course, Valentin will probably play dirty in the fight, which means a huge ordeal. But neither Valentin or Lulu seem to be thinking about Charlotte’s well-being here, and Charlotte is shown in the promo listening in to Lulu telling Valentin about the restraining order. She’ll likely be upset about her parents’ constant fighting.

Finally, the new GH promo addresses the far-reaching aftereffects of Nelle Benson Archer’s (Chloe Lanier) release from prison. As GH viewers know, she and Brad Cooper (Parry Shen) are keeping an explosive secret – that Wiley Cooper-Jones (Theo and Erik Olson) is actually Nelle and Michael Corinthos’ (Chad Duel) son Jonah Corinthos. And now that Nelle is staying with Brad, that means that she’ll get to reconnect with her son in a big way.

She’s shown in the promo holding Wiley alongside Brad, who really has no other choice but to let Nelle do whatever she wants. However, the other people in Wiley’s life aren’t going to be so thrilled.

Michael is shown in the promo trying to explain to Carly Corinthos (Laura Wright) that Nelle is living with Brad and that she expects to take care of Wiley, prompting Carly to say, “Over my dead body.”

Willow Tait (Katelyn MacMullen) isn’t happy about the situation either, as she’s shown in the promo having words with Nelle. Of course, Willow thinks that she’s Wiley’s biological mother, so she naturally feels protective of him, while Nelle knows that she is the bio mom.

Nelle will barely be able to hold it in as Willow says, “I am brokenhearted that Michael had to lose his child, but I am increasingly grateful that you are not a mother.”

It’s difficult to imagine Nelle letting too many of these types of comments go by, so we’ll see what she does and says going forward. She just might let the cat out of the bag if things go too far.

Would Willow actually fight for custody of “her” son now that Brad’s got Nelle living with him? We’ll see what happens, but it seems like a major power struggle for control of Wiley could be on the horizon!