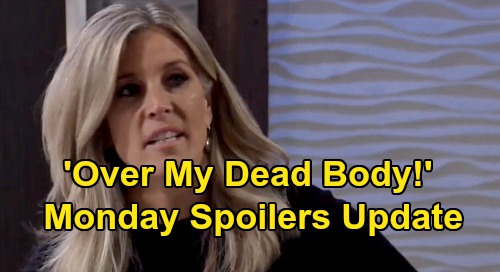 General Hospital (GH) spoilers update for Monday, January 20, teases that Ava Jerome (Maura West) will arrive at Spencer Cassadine’s (Nicolas Bechtel) boarding school and request a meeting with him. Ava will suggest it’s good to see Spencer, but he’ll admit he didn’t have much of a choice. He couldn’t exactly refuse since he was summoned by his headmaster.

Ava will get Spencer to sit with her and will acknowledge that the last few years have been difficult for him. Spencer will scoff at Ava’s sympathy since she sold out to his “sinister uncle.” Ava will suggest she hopes Spencer can forgive her once he sees all is not lost.

Spencer will fire back that he’s lost more than enough. He’ll rant about losing his inheritance, his home and his father – but that’s when his father will appear in the flesh. Nikolas Cassadine (Marcus Coloma) will gently touch his son on the shoulder and insist that Spencer hasn’t lost him.

Spencer will look overwhelmed before he launches a barrage of questions. He’ll demand to know where Nik’s been and why he didn’t come clean about his survival.

General Hospital spoilers say Ava will do whatever she can to help Nikolas make amends, but that won’t be happening just yet. Spencer will make it clear that he’s not ready for forgive Nikolas for what he’s done.

Curtis will raise his eyebrows and reply, “Have you?” He wouldn’t be surprised if Nina was still in contact with Valentin, but she’ll likely insist she hasn’t spoken to him since his arrest.

In Jordan Ashford’s (Briana Nicole Henry) office, she’ll welcome Marcus Taggert (Real Andrews) back to town and fill him in on the reason she called. Jordan is working on a little side case – a personal one that she just can’t let go.

Jordan has suspicions about Bob Massicotte’s untimely death and hopes Taggert can help her find the truth.

Taggert also mentioned the hijacked truck during his run-in with Sonny Corinthos (Maurice Benard), so he may bring that up to Jordan. If there’s a way for Tagger to cause issues for Sonny while he’s in PC, he undoubtedly will!

Speaking of causing issues, Nelle Benson Archer (Chloe Lanier) has caused more than her fair share since getting out of Pentonville. Now that Nelle is Brad Cooper’s (Parry Shen) roommate, the drama’s revving up even more.

Carly will seethe over Nelle wanting to spend time with “Wiley Cooper-Jones” (Erik and Theo Olson) and will insist it’ll happen over her dead body.

At Brad’s apartment, Nelle will demand to her hold her son. GH spoilers say Brad will reluctantly hand the kid over, which will give Michael a reason to lash out later.

Michael willl walk in and find Nelle cuddling with “Wiley,” so he’ll blast Brad for doing something so reckless and stupid.

Other General Hospital spoilers say Laura Collins (Genie Francis) will accept Jasper “Jax” Jacks (Ingo Rademacher) apology. Jax will be sorry for not telling Laura about Nik’s survival, but she’ll suggest Jax isn’t the one who broke her heart.

It was Nikolas’ responsibility to be honest with his mother, but he chose to deceive her instead.

Repairing the damage Nik’s done to his family certainly won’t be easy! We’ll give you updates as other GH news comes in. Stick with the ABC soap and don’t forget to check CDL often for the latest General Hospital spoilers, updates and news.