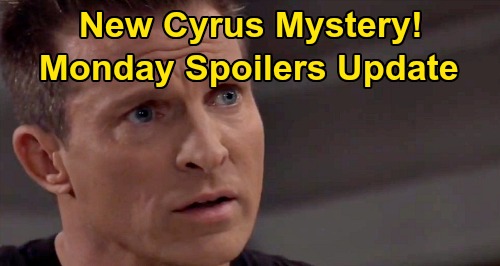 General Hospital (GH) spoilers update for Monday, March 23, teases that Jordan Ashford (Briana Nicole Henry) will try to get Harmony Miller (Inga Cadranel) on the phone. After receiving a current picture of captive TJ Ashford (Tajh Bellow), Jordan will call Harmony and leave a message. She’ll rant about how she did what Cyrus Renault (Jeff Kober) asked and will demand to know where her son is.

Curtis Ashford (Donnell Turner) will appear moments later and wonder if Jordan’s willing to join him for breakfast. Jordan will suggest Curtis knows how she gets when a case takes over her mind.

Curtis won’t think starving herself will put an end to Cyrus, who preys on weakness. Jordan will agree it’s going to take everything she has to shut Cyrus down permanently!

After Jordan rushes to answer a knock at the door, she’ll seem disappointed to see Sam McCall (Kelly Monaco). When Jordan admits she was expecting someone else, Curtis will wonder who that might be.

General Hospital spoilers say Jordan will do her best to cover and head out. Jordan will give Sam some misleading info at some point on Monday, so she’ll hope that’ll hold her off for a while.

Once Curtis is alone with Sam, he’ll push for a favor. Sam may end up doing some investigating, which probably isn’t a great idea under the circumstances. Anything risky is a bad plan since Sam could face parole violations.

Sam doesn’t know it yet, but TJ’s life is also on the line. Getting too close to the truth about Cyrus and Jordan’s connection could bring deadly danger.

Speaking of that connection, it’ll result in drugs being moved through Sonny Corinthos’ (Maurice Benard) territory. Sonny will blow a gasket over Cyrus’ sneaky move and wonder how this could’ve happened.

Jason Morgan (Steve Burton) will probably argue that Cyrus must’ve had some inside help. It may not be long until Jordan’s under suspicion, so her problems will be growing by the second.

Other General Hospital spoilers say Britt Westbourne (Kelly Thiebaud) will sit down for a chat with Franco Baldwin (Roger Howarth). As they discuss Liesl Obrecht (Kathleen Gati) at Kelly’s, Franco will raise the possibility that maybe Liesl’s innocent.

Franco will at least want to know what makes Britt so sure Liesl’s guilty. As they debate the matter, Peter August (Wes Ramsey) will pop in.

Peter will provide a subtle reminder of the evidence against Liesl. There’s a good chance Peter will also bring up wanting to bond with Britt. Perhaps Peter will find a way to mention how he saved Franco, too. By the time this conversation concludes, Franco and Britt’s doubts about Liesl’s guilt will die down.

At GH, General Hospital spoilers say Felix DuBois (Marc Anthony Samuel) will get an unpleasant surprise. Britt’s return there won’t go over well with Felix, so expect some tension.

Next, Britt will spot Nikolas Cassadine (Marcus Coloma) and really let him have it! Things will be so bad that Elizabeth Baldwin (Rebecca Herbst) feels the need to intervene.

Liz will warn Felix about someone potentially having a complete breakdown. Cameron Webber (William Lipton) is dealing with some PTSD after his recent ordeal, but he seems like he’ll be OK in time. Maybe Liz will be more concerned about Nikolas, who’s got a mountain of issues.

Spencer Cassadine (Nicolas Bechtel) rejected his father, and it’s Nikolas’ fault that Hayden Barnes (Rebecca Budig) is missing. Nik also has a very complicated marriage to Ava Jerome (Maura West) and a seemingly endless line of people who want to rip into him. Liz may fear all this drama will build until Nikolas spins out.

General Hospital spoilers say Liz’s concern for Nikolas will be good news for Ava. Once Ava gets updates, she’ll feel confident her latest plot’s going to pan out. Ava’s cooked up a plan that could break the infidelity clause, but we can’t forget Nik’s scheming against Ava as well.

Nikolas will be suspicious over Ava’s interest in something on Monday. Nik will try to figure out why it matters to Ava, but she won’t give away her secrets! It looks like another exciting GH episode’s in store. CDL will have other fantastic General Hospital spoilers, updates and news as they come in.

“You’re a dirty cop now. Cyrus has you right where he wants you.” #GH pic.twitter.com/Lrp84mUMjZ