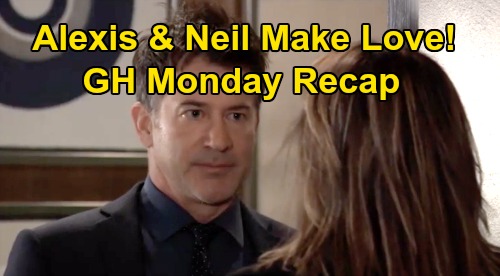 General Hospital (GH) spoilers recap for Monday, March 9, reveal that Sam McCall (Kelly Monaco) and Jason Morgan (Steve Burton) met up at the Quartermaine mansion after Sam dropped off the kids. They were kissing when Diane Miller (Carolyn Hennessy) walked in with Michael Corinthos (Chad Duell). Diane was upset and asked for a moment alone with Jason and Sam. She proceeded to read them the riot act about trying to circumvent Sam’s parole officer.

Jason soon received a text from Anna Devane (Finola Hughes) to meet at the Metro Court, and he took off, followed shortly by Sam. Diane and Michael then strategized about his custody case against Nelle Benson Archer (Chloe Lanier). Michael wanted to line up a bunch of people to testify about how awful Nelle is, but Diane said that the best strategy is to prove what a wonderful person he is.

They discussed how Diane would portray Michael as a stable member of the community with deep family ties with the upstanding Quartermaines – someone who can clearly give Wiley Quartermaine Corinthos (Erik and Theo Olson) the best home possible. She also said that Michael should consider giving Wiley a mother preferable to Nelle, and that he should consider getting married.

Meanwhile, at the Floating Rib, Willow Tait (Katelyn MacMullen) spoke with Harrison Chase (Josh Swickard) over drinks. She was upset over Nelle filing for sole custody of Wiley, and she noted that Michael needed to be ruthless with Nelle and that she was going to help him.

Over at Crimson, Sasha Gilmore (Sofia Mattsson) arrived to see Nina Reeves (Cynthia Watros) for a business meeting. Nina wanted to postpone the meeting, as she wasn’t feeling “emotionally available.” Nina looked at Sasha and said that they were on the brink of something exciting with their business venture.

Downstairs at the Metro Court, Hamilton Finn (Michael Easton) and Violet Barnes (Jophielle Love) talked and colored together until Finn wanted to go talk with Anna at the bar. They started talking about their relationship, with Anna looking hopeful that Finn might move back into her home. Just then, Maxie Jones (Kirsten Storms) and Peter August (Wes Ramsey) interrupted them and Maxie lamented about Liesl Obrecht’s (Kathleen Gati) arrest and crimes.

Maxie went on, while Peter watched intently, and ultimately both Anna and Finn said that she shouldn’t be so hard on herself. Maxie then went off to visit with Violet, and Peter and Finn shared a moment. Finn offered Peter an apology, and Peter accepted. The men then shook hands.

In New York City, Alexis Davis (Nancy Lee Grahn) and Neil Byrne (Joe Flanigan) enjoyed a drink together at a bar. Alexis wondered if them being together was risky, but Neil didn’t seem to be bothered by it. Neil wondered if he had done something wrong in their relationship, given that she was his patient, but she said that if anything, she’s the one who used therapy to manipulate him.

Alexis admitted that she was attracted to him from the very beginning, and Neil admitted the same. They both recounted their “what ifs” about their relationship, with Alexis wondering what would have happened if she had just refused to come to therapy. Ultimately, they agreed that they both messed up. Neil then walked Alexis to her hotel room door.

They said goodnight awkwardly, and Alexis paused for a moment when she got inside her room, then she flung the door open and saw Neil standing there, about to knock. They kissed passionately and eventually fell onto the bed kissing.

Back at the Floating Rib, Sasha ran into Chase, who was now alone. They talked about Nelle and about how Chase got taken in by her all those years ago. They got along well, and Chase told her that Michael was lucky to have her. Sasha said that she loves Michael and doesn’t want to lose him, but that she’s not sure she’s ready to be a mother. Sam, who was at the bar picking up food, overheard that last statement.

At the Metro Court, Jason showed up to talk with Anna but was intercepted by Damian Spinelli (Bradford Anderson) first. Spinelli told him that Peter framed Obrecht and he was all in a tizzy. Soon, Anna came along and overheard him telling Jason about Peter still being guilty. Spinelli took off and Jason and Anna talked.

Jason read down the list of Peter’s crimes and concisely laid out exactly why Peter is the one who makes the most sense as being the mastermind behind Drew Cain’s (Billy Miller) disappearance and the attempts on Andre Maddox (Anthony Washington) and Franco Baldwin’s (Roger Howarth) lives. Anna maintained that she believed in Peter and told Jason that if he does anything to harm Peter, then she’ll come after him personally.

Across the restaurant, Spinelli approached Maxie and Peter and started going on about how he didn’t believe the Obrecht was guilty. Maxie refused to hear it and blasted Spinelli, telling him that she planned on spending the rest of her life with Peter. Spinelli was horrified and left. Meanwhile, Anna walked back over to Finn and Violet, who sweetly told her that they want to come home with her. They then happily left together.

Finally, back at Crimson, Willow approached Nina asking for her help. Nina was shocked when Willow proceeded to ask her to run a tell-all expose on Nelle in the magazine…to show the world what an unfit psycho that she is. She explained that she needed to get the word out about Nelle ahead of the custody hearing.

Nina refused, saying that the tactic could backfire, plus it could result in a libel suit. Nina said that it wasn’t even Willow’s job to line up Michael’s defense, and that the custody suit has nothing to do with her. Willow surmised that Nina thought she should detach from the situation, and Nina sympathized with her, saying that mothers would do anything for their children.

There’s certainly a lot going on right now on General Hospital, so stay tuned! Stick with the ABC soap and be sure to check CDL often for the latest General Hospital recaps. spoilers, and updates.