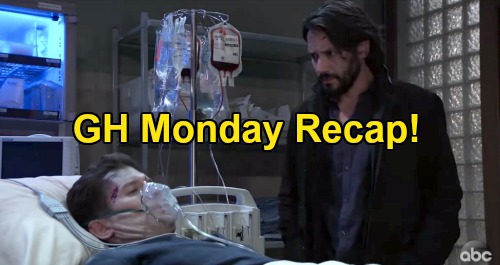 Portia reported that the test results haven’t come back yet, and that the drug that Sasha took might not have been cocaine. Soon, Portia got a call about the explosion at The Floating Rib, and she rushed off to inform the staff. Carly looked horrified.

At The Floating Rib, it was eerily still in the aftermath of the blast. Elizabeth Baldwin (Rebecca Herbst) woke up quickly and saw Franco Baldwin (Roger Howarth) across the way, then she heard a cough, and it was Cameron Webber (William Lipton) who was conscious and moving.

Cameron was immediately upset about where Danny Morgan (Porter Fasullo) and Dev Corbin aka Dev Cerci (Ashton Arbab) were.

Elsewhere, Dustin Phillips (Mark Lawson) was barely alert and awake, while Lulu Spencer (Emme Rylan) was lying unconscious under some big piece of board.

Outside the restaurant, Dante Falconeri (Dominick Zamprogna) was disoriented for a moment, then he called 911. Julian Jerome (William deVry) came along and told Dante that he was driving by when he heard the explosion. Julian looked horrified by the whole scene.

Dante went into the restaurant carefully, calling out for Lulu, eventually finding her and lifting the board up off of her. Over with Cameron, his leg was injured but he was ambulatory, and he instructed Elizabeth to go tend to Franco.

Cameron found Dev, who wouldn’t wake up and who looked absolutely awful. Meanwhile, Julian found Danny’s hat outside the pub and reeled, realizing that Danny had been at the restaurant.

Over at the gym, Laura Collins (Genie Francis) told Sonny Corinthos (Maurice Benard) that Cyrus Renault (Jeff Kober) was coming after her and that he was interested in a crime that she committed.

Laura said that she committed murder when she was a minor. Laura went onto explain that she got involved with an older man named David Hamilton. As it turned out, David wanted to get back at Laura’s mother, who had rejected him.

When Laura found out that David only wanted her to get back at her mother, she pushed him, and he fell and hit his head, dying instantly. “It was an accident,” Sonny said. Laura said that Cyrus got his hands on the file of the case that was heavily redacted due to her age.

Sonny wondered if perhaps Cyrus knew David, or if he just wanted intel on the case to hold over Laura’s head. Suddenly, both Laura and Sonny got calls about the explosion at The Floating Rib.

At Sam McCall’s (Kelly Monaco) place, Alexis Davis (Nancy Lee Grahn) was about to leave the intervention, but everyone pled for her to stay and just hear them out.

Molly Lansing-Davis (Haley Pullos) eventually got Alexis to stay, and Diane Miller (Carolyn Hennesy) read her statement to Alexis first, urging her friend to come back to her. Alexis wasn’t moved.

Suddenly, several people in the room got alerts on their phone about the explosion at The Floating Rib. Sam reeled, saying that Jason Morgan (Steve Burton) and Danny were there.

Alexis then went on a tear through the house looking for alcohol, but she didn’t find any. Molly got disgusted with her mother and went upstairs, leaving Alexis alone with Valentin Cassadine (James Patrick Stuart). Valentin read Alexis his statement, which seemed to touch Alexis somewhat.

Later, Alexis found a bottle of booze in the house, and she and Valentin sat and drank together.

Alexis fumed about Sam and her choices, and how she had sent Danny oft to be with his father, who is a magnet to danger and dangerous people. “Tonight, it all caught up with him and Danny,” Alexis said. Valentin remained stoic.

Back at The Floating Rib, Julian broke down as he held Danny’s hat. Inside the restaurant, Lulu woke up and asked Dante what happened. Lulu stood up and wanted to get to Dustin, but Dante told her that they needed to wait.

Elsewhere, Cameron yelled to Elizabeth that Dev didn’t look good, and Elizabeth yelled back that she was trying to stop Franco’s bleeding.

Outside, Portia and other hospital employees formed a makeshift triage area, and the first responders were finally there. Carly ran up and saw Julian holding Danny’s cap, and she quickly learned that Jason and Danny had been at The Rib that evening.

Sonny showed up with Laura, and Laura learned that Lulu was inside during the explosion. Laura tried to rush the scene, but Mac Scorpio (John J. York) held her back.

Inside, Lulu was really worried about Dustin, who was being put on a gurney. Dev was on a gurney also, looking really bad. Franco was taken out also. Sonny saw Dev get wheeled out and hopped in the ambulance with him, while Carly tried to call Jason but got no answer.

Laura and Lulu were reunited, and Lulu told her mom that Dustin was hurt really bad.

Mac approached Laura and said that the media needed a statement from the mayor, so Dante took Lulu to the hospital. In the ambulance, Sonny told Dev that he was going to make it.

Dev looked at Sonny and said, “Thanks for giving me a family and a home.” Sonny urged Dev to fight and not to die on him. Dev asked Sonny to tell Josslyn Jacks (Eden McCoy) that he’s sorry, and he passed away.

Back at the explosion scene, Sam rushed up and wanted to go looking for Jason and Danny. Mac and Laura stopped Sam, and just then Sam noticed that Julian was holding Danny’s hat. Sam cried, “No!” and collapsed into Julian’s arms.

Sonny returned to the explosion scene and told Carly that Dev didn’t make it, and that he needed to call Brando Corbin (Johnny Wactor) and inform him about Dev’s death before he found out from the press. Elsewhere, Laura wondered if Mac knew what caused the explosion, and Mac said that he had no idea.

At the hospital, Lulu and Dante rushed in, and a doctor said that Dustin had internal injuries and that he needed to stabilize before surgery. Lulu wanted to see Dustin, but Dante wanted Lulu to get checked out first.

Dante decided to go see Dustin. Soon, Laura showed up to comfort Lulu, who still hadn’t seen the doctor yet.

In Dustin’s cubicle, Dante walked in and Dustin immediately asked if Lulu was ok. Dante said that she was. “Promise me you’ll be there for her,” Dustin said through his oxygen mask. “She’ll need you.”

Dante agreed to be there for Lulu, and just then Dustin went into cardiac arrest and Portia ran in and called a code blue.

In Franco’s cubicle, Elizabeth told Franco that he needed surgery on his brain to relieve pressure, and that it might involve removing a part of the tumor. Franco freaked out, saying that he didn’t want to be the person he used to be.

“I’d rather die than be that guy again,” Franco insisted. But Elizabeth persisted, and Franco was furious that he was being prepped for surgery. Franco told Elizabeth to let him go.

Dante then rejoined Lulu and Laura, and he had the grim task of telling Lulu that Dustin didn’t make it and had died. Lulu totally broke down and started sobbing.

Dante gently told Lulu that Dustin’s last words were about her and that Dustin had given him this – the engagement ring for Lulu. Lulu sobbed uncontrollably.

Back at the explosion site, Julian called Cyrus and left an indignant message, while Sonny and Carly comforted Sam as she held Danny’s hat. Sam went off by herself, and Julian followed her, saying that he needed to tell her what he did.

Sonny then approached, and Sam walked away from Julian before he could confess.

Carly was talking to the fire chief when suddenly Jason appeared off to the side. Carly hugged Jason, and Sam rushed up asking Jason where Danny was. “At the Quartermaines. I just dropped him off,” Jason said, and Sam was greatly relieved.

That was a fantastic episode of General Hospital, and there’s a lot more drama coming tomorrow, so stay tuned! Stick with the ABC soap and don’t forget to check CDL frequently for the latest General Hospital spoilers, daily episode recaps, and news.