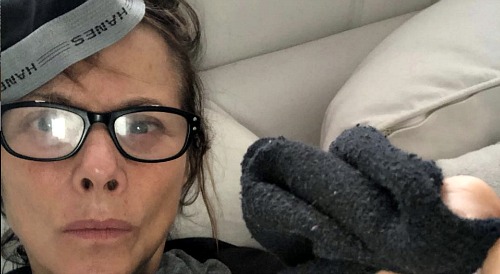 General Hospital (GH) spoilers has some news to pass on about a popular GH star. Nancy Lee Grahn, who plays Alexis Davis on the ABC soap, recently caused a stir with a handful of tweets indicating that she had just consumed marijuana and was waiting to see what would happen.

It all started with a post on Monday, March 13th, that read: “I just accidentally on purpose tried an edible from my partner’s stash who actually has a good excuse to indulge. The last time I tried weed was 30 years ago. Stay tuned, nothing bad can happen now.”

Nancy received an incredible amount of comments on the post from her followers, who anxiously awaited more tweets from Nancy about what she was experiencing.

One follower replied: “And just when I thought this evening couldn’t get better…” And another commented: “I really hope your phone is charged and ready. Please keep us updated.”

Well, Nancy did keep her followers updated about what she was doing and feeling as the substance got to work in her system. In her next tweet, Nancy reported feeling nothing unusual, saying: “20 minutes into eating a 50/50 THC and CBD edible and I feel nothing.”

A few minutes after that, Nancy tweeted: “5:49 and I still feel nothing, although the Dish guy explaining how to use the audio remote is really captivating.” And a few minutes later, Nancy reported: “6:14. I somehow pandemic ordered 17 cans of kidney beans. Kidney beans are very good.”

By this point, Nancy’s followers seemed to agree that the edible had begun to work. One follower commented: “I guess it’s starting to kick in now.” And someone else responded with COVID-19 humor, saying: “Hope you ordered TP, too.”

Then, Nancy’s next tweet came in: “6:58. I am very focused on not swallowing my tongue.” Nancy received plenty of responses on this tweet as well, including from Psychic Medium John Edward, who simply responded with a laughing emoji.

Nancy’s final tweets came in some time later. Nancy tweeted: “I’d trade a bag of wipes for a super taco” and “2:29: I’m still up.” That seemed to end the tweet storm.

At any rate, it seems that it was quite the evening for Nancy, and it made for an entertaining evening for her followers, that’s for sure! Stay tuned to General Hospital and be sure to keep CDL bookmarked for the latest GH news, spoilers, and recaps.

I just accidentally on purpose tried an edible from my partners stash who actually has a good excuse to indulge. The last time I tried weed was 30 yrs ago. Stay tuned, nothing bad can happen here now.