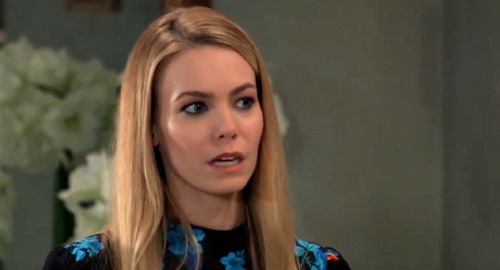 Nelle finally seemed to have a bit of a panic attack and clutched her chest. Of course, it’s possible that was just more of Nelle’s performance art. Nelle might’ve been putting on a show for the judge, but it’s also possible Nelle was genuinely that riled up.

Either way, GH may be building to a far worse episode for Nelle – one that’s positively real and leaves Nina in fear for Nelle’s life.

If Nelle was that shocked and livid over Nina’s backstabbing, just imagine how she’ll feel when she finds out Nina’s her mom! After all the hard times Nelle faced in her childhood and in the years that followed, she may end up blaming Nina – at least at first.

General Hospital spoilers suggest Nina and Nelle will have their most emotional confrontation yet.

Once that half-heart pendant comes into play, it could lead to a major medical crisis. Whether fake or real, was Nelle’s courtroom panic attack a clue about another one that’s looming – perhaps a worse incident that leads to Nelle’s collapse?

It could even be a sign that there Nelle has a deeper health issue like some heart trouble or kidney complications.

Regardless, it seems soapy for Nina and Nelle’s necklace faceoff to end in a scary disaster like this. Nelle might have to be rushed to GH, where Nina could realize that’s her daughter in there. HER daughter! The long-lost child Nina’s wanted for as long as she can remember!

Nina’s maternal instincts may kick in quickly, but Nelle could take some time to warm up to her newfound mother. We could move into the next phase of this story where Nina makes Nelle her project.

This could build to Nina deciding there’s a chance for Nelle to change after all if she has a loving mother’s support.

Nina bonded with her fake daughter, Sasha Gilmore (Sofia Mattsson), through a hospital crisis. It’s only fair for Nina to bond with her real daughter through a similar situation.

It’s easy to imagine Nina sitting by unconscious Nelle’s side and vowing to be a good mother to her.

Some exciting twists and turns are ahead in this storyline, so stay tuned. As other GH news rolls in, we’ll bring you updates. General Hospital spoilers say Nelle and Nina should form a true connection eventually, but expect some delays and roadblocks!

CDL’s your hotspot for the latest General Hospital spoilers, updates and news, so visit often for more details.