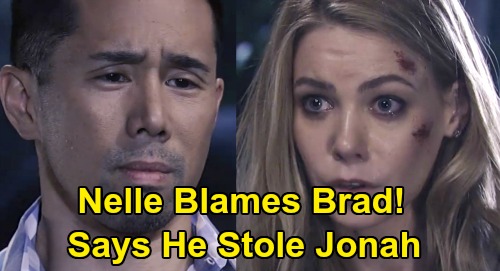 General Hospital (GH) spoilers tease that Nelle Benson Archer (Chloe Lanier) will leave Brad Cooper (Parry Shen) in total shock. They’ll both find themselves arrested and in lockup following the events of the baby swap reveal. However, it’s what Nelle does next that’ll really throw Brad for a loop.

True friendship isn’t something Nelle’s capable of, but her bond with Brad’s probably the closest thing she has to one. Unfortunately, loyalty is a concept that Nelle doesn’t understand. She’s only loyal to herself and her own agenda.

Brad’s about to find that out the hard way when Nelle completely turns on him. She’ll throw Brad under the bus and back over it a few times for good measure! General Hospital spoilers say Nelle will pretend she’s terrified of Brad – the big bad monster who stole her baby. Nelle will lie that she was unconscious when Brad came along and took her child.

Michael Corinthos (Chad Duell), Carly Corinthos (Laura Wright) and anyone else who knows Nelle’s dirty tricks surely won’t buy that. In terms of defending herself though, Nelle’s claims may save her.

General Hospital spoilers say Nelle will tell quite a sob story, and there’ll be no proof against her. It’s Brad who’s been raising “Wiley Cooper-Jones” (Erik and Theo Olson) and acting like a nervous wreck all this time.

Nelle may also have an ace in the hole – some added oomph to help sell her “woe is me” tale. General Hospital spoilers for February sweeps point to trouble for Liesl Obrecht (Kathleen Gati). Just when Liesl thinks she’s moving on with her life, the past will come back to haunt her.

GH fans will recall that Liesl delivered “Wiley” and later figured out that the kid was actually Jonah. This is the perfect opportunity for Nelle to argue that Liesl and Brad orchestrated this together.

Nelle might contend that they conspired to steal Jonah and let Brad raise him with Lucas Jones (Ryan Carnes). She can act like they carried out the switch while she was out cold on the ground.

Whether Liesl ends up getting dragged into all this or not, Brad will start to panic. He’ll fear that Nelle’s going to make his prison sentence worse with her mountain of deception.

General Hospital spoilers, updates and news say Brad will have a meltdown as Julian Jerome (William deVry) struggles to keep him under control. Do you think Nelle will get out of jail with her baby swap story?

It sounds like some exciting twists and turns are ahead. Do you think Nelle will get away with her bogus story? We keep you up to speed as other GH news comes in, so be sure to check CDL frequently for General Hospital spoilers and updates posts.