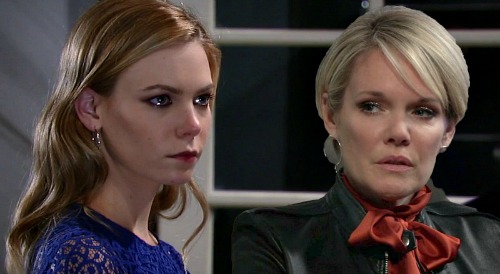 Nina’s a powerful businesswoman and an upstanding member of the community. This is a woman who’s overcome her own mistakes and really made a name for herself in Port Charles.

Nina also happens to be the only person who’s willing to even consider giving Nelle another chance. Pretty much everyone else in PC hates Nelle’s guts, so she’s got a lot riding on her new pal and employer.

Of course, GH fans know Nina is actually Nelle’s biological mother. Neither one of them knows about that link just yet, so that’ll be important as we build to the custody hearing aftermath.

Nelle will be shocked over Nina’s testimony and quite combative soon after. She’d surely be grateful if Nina actually supported her on the stand as planned, so it sounds like Nina will go against Nelle instead. Since Nina was hugging Nelle and acting supportive before court, Nelle’s going to be outraged.

When it comes to Nelle, she doesn’t like to be misled or lied to. Only Nelle’s allowed to do that!

What will Nelle do after Nina’s shocking move on the stand? It’s tough to imagine Nelle wanting to work for Nina after that. Nelle may quit Crimson on the spot and vow to find employment elsewhere.

Nina might protest that she had to do what was best for Wiley Quartermaine-Corinthos (Erik and Theo Olson), but Nelle wouldn’t see it that way. She might refuse to work for a backstabber like Nina, but Nelle could use full-time employment – especially if she ends up having to appeal the judge’s custody decision.

Nelle scored plenty of money from selling Shiloh Archer’s (Coby Ryan McLaughlin) shares, but she needs to prove she can be a productive member of society. Since Nelle blackmailed Julian Jerome (William deVry) into being her husband, maybe she’ll blackmail his sister into giving her a job at the gallery again.

Unless Ava Cassadine (Maura West) wants Julian to end up dead from Sonny Corinthos’ (Maurice Benard) bullet, she may have no choice but to do whatever Nelle asks.

This would be a great way to put Nelle back in Ava’s orbit and set up a different big reveal. Since Nelle is Nina’s daughter, that makes Kiki Jerome (Hayley Erin) her dead sister through their deceased father, Silas Clay (Michael Easton).

It’d be wise for General Hospital to reestablish some form of a relationship between Ava and Nelle in the weeks ahead, even if it’s a tense one. Maybe Ava could even be the one to figure out the truth about Nelle and Nina’s connection! As other GH news and updates emerge, we’ll keep you posted.