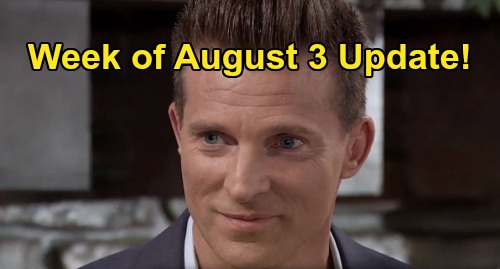 General Hospital (GH) spoilers preview teases that the wait is almost over, and it’s about time for new episodes to hit our screens the week of August 3-7. As you might be aware, GH cast and crew were back filming starting on Wednesday, July 22nd, and on Monday, August 3rd, we’ll see new episodes begin.

The show has released a brief promo announcing the return, as well as some spoilers indicating what’s going to happen on each day during the week of August 3rd. And we’ve got the scoop on what GH viewers can expect when the new episodes return.

On Monday, it looks like the drama will pick right back up at Wiley Quartermaine Corinthos’ (Erik and Theo Olson) custody hearing. According to new GH spoilers, Nelle Jerome (Chloe Lanier) will find herself feeling shaken while Jasper “Jax” Jacks (Ingo Rademacher) is impressed with Nina Reeves’ (Cynthia Watros) strength.

That’s pretty interesting, since Nina was about to testify on Nelle’s behalf at the custody hearing right before the hiatus. So, will Nina actually decide to tank Nelle’s case, which is what leaves Jax impressed?

Meanwhile, Valentin Cassadine (James Patrick Stuart) will continue his meeting at the Metro Court with Brook Lynn Quartermaine (Amanda Setton). GH viewers will remember that Brook Lynn had been meeting with her sleazy producer Linc Brown (Dan Buran) when suddenly Valentin emerged and said that he wanted to talk with Brook Lynn.

Brook Lynn seemed to be slowly realizing that perhaps Valentin is the one who acquired her ELQ shares, so this should be an interesting discussion.

Finally, GH spoilers for Monday say that Ned Quartermaine (Wally Kurth) and Olivia Quartermaine (Lisa LoCicero) will be at odds over something, which could be over Olivia’s decision to open up to Robert Scorpio (Tristan Rogers) about her feelings about Dante Falconeri’s (Dominick Zamprogna) situation and her decision to hire a psychic for emotional support.

Additionally, Portia Robinson (Brooke Kerr) will have an uncomfortable encounter, which could be with Cyrus Renault (Jeff Kober), who has recently met Portia’s daughter Trina Robinson (Sydney Mikayla).

In fact, the last that viewers saw, Mike was in awful shape and Sonny was struggling with whether to put a DNR order in his medical chart, which the doctors felt was the right thing to do at this point. Sonny and Jason Morgan (Steve Burton) had just had an emotional scene over the whole situation.

Might Carly come home to find that Sonny has made the heartbreaking decision to give Mike’s caregivers a DNR order? Or could Mike even have died at this point? GH spoilers aren’t clear on this, but it seems crystal clear that Sonny will be emotionally distraught and will need Carly’s support.

Across town, Valentin and Martin Grey (Michael E. Knight) will strategize, no doubt over how Valentin is going to get his hands on more ELQ shares, and Brook Lynn will interrupt Ned, probably with the horrible news about how Valentin managed to get her shares of the family company.

Finally, GH spoilers for Tuesday say that Nelle will be confrontational, suggesting that things might not go so well for her at the custody hearing. It would be just like Nelle to make some huge outburst in court, since she doesn’t take bad news or disappointment well.

Could Nelle wind up unhappy with the outcome of the custody case? That could suggest either a total loss for Nelle or joint custody of Wiley, either of which outcomes Nelle wouldn’t like.

Moving onto Wednesday, Sonny will have some sort of crisis of conscience, which could have to do with his decision involving Mike’s DNR or his care. If Mike does go into cardiac arrest (for example) and Sonny’s decision to put a DNR in Mike’s chart means that he doesn’t get revived, Sonny is probably going to have a really hard time dealing with that.

Meanwhile, Valentin will make some sort of proposition to Sam McCall (Kelly Monaco) that probably won’t be met with kindness or receptiveness at all.

In other matters on Wednesday, Alexis Davis (Nancy Lee Grahn) will get a visit from an old friend, so we’ll see what that’s all about, and Willow Corinthos (Katelyn MacMullen) and Michael Corinthos (Chad Duell) will grow closer.

Chances are, Willow and Michael will bond as they’re caring for Wiley and doing their best to protect him from Nelle, who will demand to see her son on Wednesday’s episode. We’ll see how that goes.

On Thursday, Jordan Ashford (Briana Nicole Henry) will be on the scene and confiding in Jason about something. This should be interesting, since there’s not really much that Jordan knows that Jason doesn’t at this point…except for the matter of who Jordan was talking to on that burner phone a while back.

GH fans have suspected and hoped that it was a very alive Marcus Taggert (Reál Andrews) that Jordan was talking to, and if it was, then Jordan might confide in Jason about that.

Meanwhile, Maxie Jones (Kirsten Storms) and Lucy Coe (Lynn Herring) will come to an agreement about Deception, while Sam and Carly bond over a “common struggle.” Sam and Carly could both be dealing with being unable to be with or get through to Jason and Sonny, respectively.

Curtis Ashford (Donnell Turner) will be in action as well, as he bumps into Harrison Chase (Josh Swickard), while Cyrus takes a meeting with Brando Corbin (Johnny Wactor).

On Friday, Brando will talk with Sonny right on the heels of his meeting with Cyrus. Something tells us that Brando won’t be happy to have had a conversation with Cyrus, so he’ll probably relay the whole thing to Sonny and ask for guidance.

Of course, it would be just like Cyrus to try to worm his way into Sonny’s family by turning Brando against him, but something tells us that Brando wouldn’t fall for anything like that.

Speaking of Cyrus, he’ll continue to manipulate Jordan, while Portia and Hamilton Finn (Michael Easton) talk about their respective relationships with their daughters. Of course, viewers know that Finn loves little Violet Finn (Jophielle Love) fiercely, and Portia feels the same about Trina, so they’ll have much to discuss.

Finally, Maxie will have second thoughts about something, which seems critical since she was having clear pregnancy symptoms before the hiatus. Could Maxie have found out that she was pregnant and be weighing her options about having another baby at this point?

And while all this is going on, Anna Devane (Finola Hughes) will find herself once again defending Peter August (Wes Ramsey) – could Robert be on the attack again?

That wraps up our look at the upcoming action urging the week of August 3rd. Be sure to tune in so you don’t miss any of the all-new action and episodes. Stick with the ABC soap and don’t forget to keep CDL as your go-to source for the latest General Hospital spoilers, updates, and news.