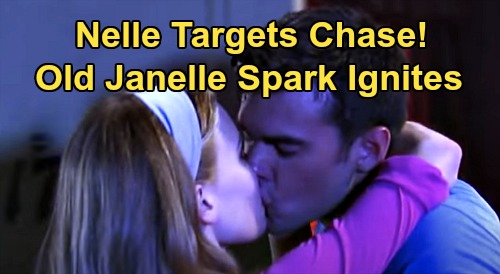 General Hospital (GH) spoilers tease that Sasha Gilmore (Sofia Mattsson) will head down a destructive path in the coming weeks. Her unhealthy coping strategies could leave her headed for trouble. What about Harrison Chase (Josh Swickard), who’s also in a pretty dark place right now? Could Chase find himself coping in an unhealthy way as well?

Sasha’s prediction for Willow Tait (Katelyn MacMullen) and Michael Corinthos (Chad Duell) seemed spot-on. She suggested that by Wiley Quartermaine-Corinthos’ (Erik and Theo Olson) third birthday – or maybe even before – Willow would be madly in love with Michael. Sasha fully expects this marriage of convenience to turn into a real love story.

That’s certainly the story GH has set up here, but it only works if Michael gets full or at least partial custody of Wiley. With that in mind, Nelle Benson Archer (Chloe Lanier) could find herself in a pretty dark place, too.

What happens if Nelle loses custody entirely? A lot can happen between now and the hearing, so the Corinthos clan could deliver some sort of blow.

General Hospital spoilers say Nina Reeves (Cynthia Watros) will play a crucial role in the outcome of this custody case. Since we know Nina is Nelle’s biological mother, it’ll really be something if Nina costs her own daughter custody of her child. It could set Nina and Nelle up for quite a feud.

Of course, Nelle doesn’t handle defeat very well anyway, so losing this battle would take a toll on her. Throw in this instant mom revelation and the new strain, which would make things even more complicated. Nelle will need some sort of relief – and she clearly hasn’t had a hot hookup in forever.

General Hospital has been doing some unexpected romps in the sheets lately. Julian Jerome (William deVry) had a surprising fling with Britt Westbourne (Kelly Thiebaud).

Molly Lansing-Davis (Haley Pullos) also landed in bed with Brando Corbin (Johnny Wactor). Which characters will have the next out-of-the-blue hookup?

There’s one option that’d make some serious waves. What if in their darkest moments, Chase and Nelle hooked up again? Nelle seemed quite intrigued when she overheard the “affair” news.

Now it’s possible Nelle will simply twist this as a weapon to use against Michael, but maybe a little piece of her was glad to see “Chillow” destroyed.

When Chase showed up at GH after Ryan Chamberlain’s (Jon Lindstrom) “attack” on Nelle, she was quick to point out that he must still care about her. Chase shut down the idea, but he obviously got swept up in Nelle’s web once upon a time.

Could “Janelle” as he likes to call her pull vulnerable Chase in once again?

Even if GH didn’t want to do a real romance, this is something worth pursuing. Back when fans first learned about Chase and Nelle’s old connection, Chase approached her for some tense moments.

Although Chase can be menacing with Nelle, there’s also a certain intensity about them. That intensity could be stoked into passion!

Nelle seems to feel differently about Chase than she does about Michael. Since Michael’s so tied to Carly Corinthos (Laura Wright) and that whole family, there’s underlying disgust that Nelle can’t shake. Nelle just wants to beat Michael at this point.

With Chase, it almost seems like Nelle wants to conquer him again – at least that could be the case based on comments like that one at GH. Nelle would seemingly like to prove she still has power over Chase in some way. Maybe Nelle could indeed have that power under the circumstances!

As Willow falls for Michael, Chase may spin out and lose sight of who he is. Could Chase be in a dark enough place to land in bed with Nelle? There’s a thin line between love and hate, so anything’s possible!