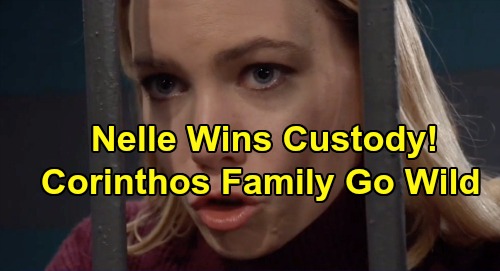 General Hospital (GH) spoilers tease that Nelle Benson (Chloe Lanier) will count on her lie paying off. GH fans know Nelle decided to turn on her partner in crime. Nelle is certainly a creature of improvisation, so she argued that Brad Cooper (Parry Shen) stole her child that fateful night. She’s hoping she can get by with painting herself as a victim and accusing Brad of being a baby thief.

Since GH writers are bringing this lie into it, there’s a good chance Nelle’s strategy will work. She could’ve just come clean and said she wasn’t sorry for making the Corinthos clan suffer. If General Hospital was wrapping up the story, that’s what would’ve happened.

Instead, they intend to milk the drama of the big reveal for all it’s worth. It’s smart since Nelle’s one of the most entertaining things about General Hospital right now. Every soap needs a psycho! Nelle’s behavior is unpredictable and leads to some fun twists. She’s capable of anything and can hold her own against the Corinthos family.

Speaking of the Corinthos family, they’re sure to be furious if Nelle gets away with this baby switch. Michael Corinthos (Chad Duell) knows good and well that Brad didn’t act alone. He wasn’t buying Nelle’s sob story for a second.

Sonny Corinthos (Maurice Benard) and Carly Corinthos (Laura Wright) aren’t going to be pleased when Nelle adds to Michael’s suffering. If Nelle scores her freedom, you can bet she’s going to want custody rights. Nelle’s got money from her ELQ shares, so she can hire a top-notch lawyer and make a solid case in court.

After all, Sonny’s mob chaos is exploding all around him. Daddy Michael was even in that recent attack down on the pier. Nelle’s attorney can make a strong case for why she’s actually the safer option. If the judge happens to be a Dawn of Day supporter, that would also work in Nelle’s favor.

Whether Nelle ends up with shared custody or even full, it’d be fun to watch Michael and the rest of the gang put up with her. This could serve as karma for how nasty Sonny and Carly have been to Ava Jerome (Maura West) over Avery Corinthos (Ava and Grace Scarola).

Naturally, Michael and his loved ones would want to fight for Wiley. They’d be eager to take Nelle down, so this would be a great new story direction. General Hospital spoilers, updates and news point to much more Nelle mayhem, so stay tuned.

Do you enjoy watching Nelle stir the pot? How will Michael handle it if Nelle scores custody rights? Stick with CDL for all the latest General Hospital spoilers, news and updates.