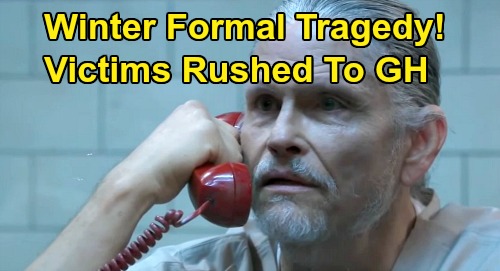 Sonny recently retaliated, but we all know how a mob war works. Now it’s Cyrus’ turn to return the favor and keep this battle going. There’s even another layer in play since Cyrus is really out to get Jordan Ashford (Briana Nicole Henry) and Marcus Taggert (Real Andrews).

Cyrus hinted at burning Port Charles to the ground during his recent meeting with Jordan. He may take another step toward that goal soon enough. On March 2, General Hospital spoilers say the ER will be rather chaotic. Multiple victims will be rushed to GH, which lets us know somethings big is about to go down.

We have to consider the timing of all this. March 2 falls on a Monday, which means the true attack will probably happen the Friday before. That’d be Friday, February 28. Now look at what’s set to go down around that time: the high school’s winter formal.

If we put the puzzle pieces together, the timeline looks something like this. On February 27, General Hospital spoilers say Trina Robinson (Sydney Mikayla) and Cameron Webber (William Lipton) will head out on their first “date.”

Trina will do her best to make Josslyn Jacks (Eden McCoy) jealous as part of her matchmaking efforts for Cameron.

February 28 should bring some scenes at the winter formal and could potentially be where Cyrus’ attack strikes. It makes sense considering Taggert’s concerned about Trina’s safety and recently wanted Cam to get her home safely.

That may have been a setup for Cameron to serve as Trina’s protector in this potential attack. It’d be nice to see Cam play the hero – perhaps for both Trina and Josslyn.

Sonny will unleash his fury after this next incident. He’ll want answers and may assume this was about targeting Josslyn, Carly Corinthos’ (Laura Wright) daughter. In reality, it may be more about targeting Trina.

Of course, more General Hospital spoilers, updates and news will emerge as this story develops. It’s just a good idea to look at what we know so far and start preparing for what’s ahead.

Bottom line, GH viewers can expect several injured Port Charles residents shortly after the winter formal takes place. Will those two things be connected? General Hospital spoilers say some exciting stuff’s brewing, so be sure to check CDL often for the latest GH news and updates.