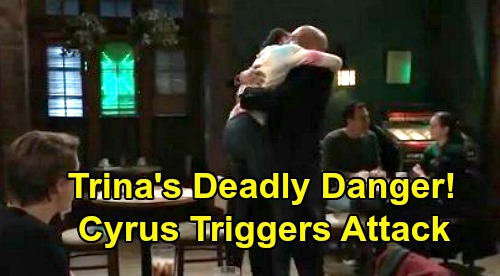 General Hospital (GH) spoilers reveal that the show recently disclosed a shocking connection: Trina Robinson (Sydney Mikayla) is Marcus Taggert’s (Real Andrews) daughter. Naturally, this sparks plenty of questions and story opportunities. GH will spill all as this hot plot moves along, but we want to focus on the grave danger Trina might be in.

After all, Jordan Ashford (Briana Nicole Henry) is pretty rattled over the recent deaths, which were connected to the Cyrus Renault (Jeff Kober) bust. Bob Massicotte (Randy J. Goodwin) was murdered based on the info they uncovered. Now Mark Simon has died under the same suspicious circumstances. They were all part of a four-person team, so Jordan fears they’ll be next.

Taggert reassured Jordan, but it’s clear that there’s serious danger here. Cyrus has no problems letting the family members of his enemies get caught in the crossfire. Just look at all the drama that went down with the Corinthos clan. Josslyn Jacks (Eden McCoy) could’ve been killed in that shootout down on the pier.

Jordan and Taggert may find themselves under attack soon, but they may not be the only ones. We could see a situation where Trina and possibly even T.J. Ashford (Tajh Bellow) become part of the peril. It’s worth noting that T.J.’s suddenly back on the scene – just in time for all this deadly Cyrus drama.

There’s also a reason Taggert’s in town now and GH writers have decided to make him Trina’s father. Will Cyrus target Trina to get to Taggert? It’s certainly a possibility to consider now that General Hospital has exposed their previously hidden bond. This would be a great chance to bring some gripping teen drama.

Cameron Webber (William Lipton) recently admitted that he likes Josslyn a lot. He opened up to Trina a bit, although it was hard for him. Cam suggested it was difficult because this isn’t just some little crush. He has deep feelings for Josslyn, so Trina has resolved to help him.

However, Cameron and Trina clearly have a sweet connection as well. This could be GH’s shot at playing it up and creating a nice love triangle. If Trina nearly dies and has a hospital crisis, that could be Cameron’s cue to realize perhaps his feelings run deeper than friendship. He could find himself torn between Joss and Trina.

Whatever the case, Taggert could easily bring major danger to Trina’s world! General Hospital spoilers, updates and news say the excitement’s about to rev up. Port Charles will face more bombshells in the weeks ahead, so stay tuned.

Do you think Taggert will put a target on Trina’s back? What did you think about the father-daughter reveal? Be sure to drop by CDL often for more General Hospital spoilers, updates and news.