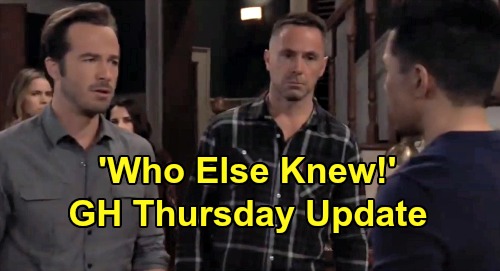 General Hospital (GH) spoilers update for Thursday, February 20, teases that Jason Morgan (Steve Burton) will feel confident serious damage was done to Cyrus Renault (Jeff Kober). He’ll assure Sonny Corinthos (Maurice Benard) that their mission was a success, but Sonny won’t be satisfied. Although Sonny managed to send a message, total destruction may be the only thing that’ll work for him.

Over with Jordan Ashford (Briana Nicole Henry), she’ll come face to face with Cyrus at Pentonville. Cyrus will admit he was wondering when he’d see Jordan again. Of course, Jordan will probably want to cut to the chase. Two people are dead from her team of four – the team that put Cyrus behind bars.

Jordan won’t want any more casualties, but that’s not really up to her. Vengeful Cyrus is in the driver’s seat, so he may remind Jordan of that. There may not be much Jordan can say or do to change his mind.

As for Marcus Taggert (Real Andrews), he’ll have another run-in with Curtis Ashford (Donnell Turner). It looks like Curtis will try to drag Taggert’s daughter, Trina Robinson (Sydney Mikayla), into things this time.

That’s not going to fly with Taggert, who’ll want Curtis to mind his own business. However, there’s surely more to the story when it comes to Trina and her dad. Taggert’s keeping even more secrets than Curtis thought, so Curtis will be more determined than ever to keep digging.

Other General Hospital spoilers say Sam McCall (Kelly Monaco) will make a crucial call. She’ll apparently get Jason on the phone so she can pass along some baby switch updates. Sam will insist there’s something Jason and Sonny should know. They’ll be as furious as the rest of Michael Corinthos’ (Chad Duell) loved ones once they learn this stolen child news.

“Wiley Cooper-Jones” (Erik and Theo Olson) is on the verge of being stolen once again thanks to sneaky Nelle Benson Archer (Chloe Lanier). She whacked Willow Tait (Katelyn MacMullen) in the head, which has left her unconscious on the floor of her apartment.

Now Nelle has a chance to take the kid and run! Nelle will indeed get her hands on “Wiley” and let him know he’s joining his mommy on a trip.

Nevertheless, General Hospital spoilers say Nelle won’t be catching her flight. This kidnapping attempt will be thwarted before the week’s over, so GH fans can expect Nelle’s arrest instead. As for Brad, he’ll be taken into custody soon as well.

Brad just has to answer the rest of Lucas Jones’ (Ryan Carnes) questions first, including one that’ll be of particular interest to Julian Jerome (William deVry).

Lucas will urge Brad to tell him who else knew the truth about “Wiley.” After mulling over his options for a moment, Brad will decide not to rat Julian out. Lucas is still recovering from a severe head injury that left him comatose.

Lucac’s losing his sweet boy and now knows his husband is a lying baby thief. Brad will fear that Julian’s involvement would push Lucas over the edge, so he’ll stay tight-lipped.

General Hospital spoilers say Brad will try to make his silence work in his favor. He’ll eventually blackmail Julian into helping him get off the hook with a fancy lawyer, so we’ll see how that plan works out! Don’t miss all our exciting updates and news as this GH storyline develops. As always, make CDL your hotspot for General Hospital spoilers posts.