General Hospital Spoilers: Brad’s Jail Threat – Find a Lawyer to Beat Charges or Julian’s Going Down With Him 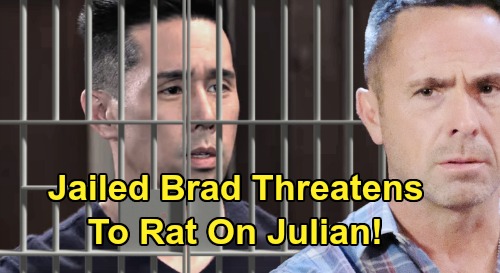 General Hospital (GH) spoilers tease that Brad Cooper (Parry Shen) will find himself in a position he’s never been in before. GH fans know Brad can be manipulative with the best of them, but he’ll be way out of his league soon enough.

Even though Nelle Benson Archer (Chloe Lanier) can be a wildcard, Brad still considers her an ally. He certainly never thought Nelle would be willing to turn him into a foe!

Nevertheless, that’ll be Nelle’s new strategy after her arrest – and it’ll leave Brad freaking out behind bars. The jailed duo will be at odds after Nelle rants about Brad stealing her precious Jonah Corinthos aka “Wiley Cooper-Jones” (Erik and Theo Olson).

There were a lot of scenarios that played out in Brad’s mind before he big reveal, but this definitely isn’t one of them.

General Hospital spoilers say Nelle will point the finger at Brad for robbing her of her bundle of joy. She’ll insist she lost consciousness after giving birth and argue that it must’ve happened then. Nelle will want everyone to believe she’s just as much the victim as Michael Corinthos (Chad Duell).

When Julian Jerome (William deVry) arrives at the PCPD to visit Brad in lockup, he won’t like what he finds. General Hospital spoilers say Brad will be a total mess.

He’ll be on the verge of ratting out Julian in hopes of reducing his sentence and minimizing the damage. The weight of Nelle’s betrayal will leave Brad on the defense and desperate to drag someone else into this.

Of course, Julian won’t want to be that someone! He’ll do his best to convince Brad that he has to keep his mouth shut. Telling the truth would only make things harder for Lucas Jones (Ryan Carnes).

Brad will understand that, but his freedom will also be on the line. He’ll bicker with Julian, who’ll assure Brad that he can get him the very best lawyer.

GH spoilers, updates and news say Brad will ultimately deliver an ultimatum. He’ll suggest Julian had better hope this high-powered attorney comes through for him.

Brad will contend that the only way he’s letting Julian off the hook is if he walks free. Either Julian hires a lawyer that can beat these charges and help Brad avoid prison or else Julian’s going down with him.