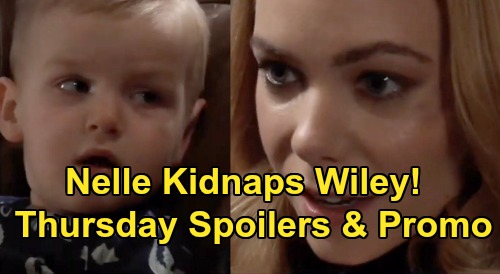 General Hospital (GH) spoilers for Thursday, February 20, tease that Brad Cooper (Parry Shen) will find himself in another tight spot. He’s just been grilled and berated at the Corinthos house, but there’s one answer Lucas Jones (Ryan Carnes) still needs. Lucas will push Brad to tell him who else knew “Wiley Cooper-Jones” (Erik and Theo Olson) was Michael Corinthos’ (Chad Duell) son.

Brad will have to make a tough call here since he’s already caused so much damage. Lucas recently came out of a coma and is about to lose the son he’s raised from birth. He also just found out his husband’s a baby-stealing dirtbag, so Brad won’t want to tell Lucas that his own father’s part of the cover-up.

Brad will keep Julian Jerome (William deVry) out of this in Thursday’s GH episode. He’ll hope that eases Lucas pain in some small way, but it’ll actually serve as important leverage later – and Brad’s certainly going to need it! General Hospital spoilers say Brad’s arrest is coming up soon.

In the meantime, Nelle will cling to the hope of starting a new life with “Wiley.” She just knocked out Willow Tait (Katelyn MacMullen), so she’s another step closer to her goal. Nelle will scoop up “Wiley” and tell him he’s going on a little trip with Mommy. She’ll want to make that vision board of hers a reality, but Nelle’s plan is about to go awry.

Whatever the case, Sam McCall (Kelly Monaco) will make an important phone call in Thursday’s episode. It appears Sam will get in touch with Jason Morgan (Steve Burton) about the baby swap.

Once Jason’s in the loop, he can give Sonny Corinthos (Maurice Benard) updates on this bombshell. You can bet Sonny will be riled up and ready for heads to roll! Before that call comes in, Jason should give Sonny the latest news about the hijacked shipment.

Jason blew the place up as he left, so he’ll assure Sonny that Cyrus Renault (Jeff Kober) got hurt tonight. Sonny will reply, “Not enough.”

It’s clear that Sonny and Cyrus’ war is just getting started, but we should focus on different battle for now. Jordan Ashford (Briana Nicole Henry) will sit down for a meeting with Cyrus, who’ll admit he wondered when he would see her again.

Cyrus will probably allude to the deadly messages he sent and leave Jordan asking how they can end this. Unfortunately, the only answer for Cyrus may be more revenge.

Curtis should start asking questions about Taggert’s daughter and even Jordan again, but Taggert will fire back that his life is none of Curtis’ business. As for Trina and Cameron Webber (William Lipton), they’ll stand there gawking as the conflict intensifies.