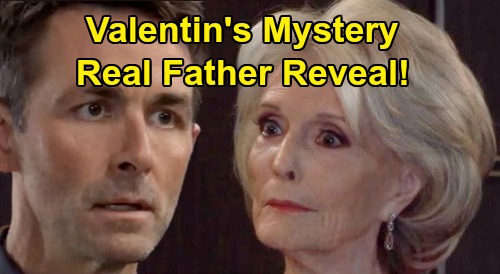 General Hospital (GH) spoilers tease that another mystery has opened up thanks to a recent revelation. GH fans know a blood test confirmed what Nikolas Cassadine (Marcus Coloma) had been insisting: Valentin isn’t a true Cassadine.

It was a devastating blow for Valentin, who sank to a dark place as he spoke with Helena Cassadine’s (Constance Towers) “ghost” and got some answers. However, there’s one answer Valentin didn’t get.

Valentin still doesn’t know who his real father is – and James Patrick Stuart doesn’t know either according to a new interview with Michael Fairman.

Stuart was asked if Valentin had any idea who his biological father could be. “I don’t think so,” Stuart said. “I don’t believe so. I know I don’t. I think once he realizes that Helena is in fact the mother, I think he’d rather just go into oblivion. I think at that point, he’s out of answers.”

This is all still pretty overwhelming for Valentin right now, but he may change his mind about going into oblivion down the road. It’s certainly a topic that GH writers may want to explore.

After all, they’ve got a golden opportunity to make Valentin’s bio dad someone significant. There are already some wild theories floating around among fans who’d like to see this story play out.

Some General Hospital viewers have been suggesting Luke Spencer (Anthony Geary) as a father candidate. However, GH writers made it clear that Charlotte Cassadine (Scarlett Fernandez) was a way of crossing Helena’s bloodline with Luke’s.

It was Helena’s twisted vision and is the only reason Charlotte even exists. There’d be no need to go to that trouble if Valentin was Luke’s son.

Plus, that’d make Valentin and Lulu Spencer (Emme Rylan) half-siblings as well as parents to Charlotte. That just doesn’t seem like a road General Hospital writers want to head down.

Of course, things could change if there’s still a Charlotte paternity twist coming – one that even Helena didn’t know about! GH could make some updates to the storyline and spark another round of shocking news.

Another theory out there is that Cesar Faison (Anders Hove) might be Valentin’s bio dad. That could be interesting since it would make Valentin and Peter August (Wes Ramsey) half-brothers. General Hospital could focus on building up their rivalry and pull some interesting stories out of that.

There’s also a chance it’s another familiar face of the past or perhaps even a new character. GH has left the door wide open when it comes to possibilities. Whatever happens, let’s hope Valentin eventually unravels this mystery!