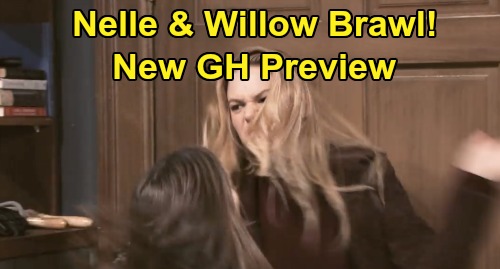 General Hospital (GH) spoilers new preview update teases that we’re in for some serious action for the rest of this week, February 18 to February 21. As you probably know if you caught the first GH preview promo for this week, there’s a lot in store, including Michael Corinthos (Chad Duell) learning the truth about Wiley Cooper-Jones (Theo and Eric Olson).

Well, now GH has released a second promo called “Michael Learns The Truth,” and it shows some more explosive details about how things will unfold this week.

Well, now that Curtis has caught Taggert and Jordan in a lie about why Taggert came to Port Charles, he’s feeling determined to find out what’s going on. But as it turns out, Jordan and Taggert have hinted that they, along with Bob, did something possibly illegal back in the day, and now it might be coming back to bite. We’ll see where this leads.

Next, the new preview shows Sonny Corinthos (Maurice Benard) and Jason Morgan (Steve Burton) preparing for war. Jason is shown loading a gun right there in the Corinthos living room while Sonny looks on, so clearly Jason’s gearing up for a big confrontation of some sort. This likely has to do with payback for Cyrus Renault’s (Jeff Kober) coordinated attacks on Sonny’s family.

Now, let’s get into the real meat of the new preview promo, which has to do with Wiley and related characters. The promo shows Nelle Benson Archer (Chloe Lanier) telling someone “I’m all ears” then getting into an explosive physical altercation with Willow Tait (Katelyn MacMullen) in Willow and Harrison Chase’s (Josh Swickard) apartment. It looks like a totally fierce fight, a brutal brawl, as Nelle is shown slapping Willow and Willow shoves Nelle big time.

But the big question here is why are they fighting? Obviously, they can’t stand each other, but could Wiley be in that apartment, too? We know that Nelle is planning on fleeing Port Charles with Wiley in the near future.

Could Wiley be with Willow at the apartment and Nelle wants him? Time will tell, but something’s definitely got the ladies all worked up and in fierce protective mode!

Finally, the promo shows a familiar scene – one that was in the previous promo – but it’s a powerful one. At a gathering at the Corinthos house, Lucas Jones (Ryan Carnes) apparently starts to remember some things from the night of the crash.

Now that his brain is healing and some time has passed, it looks like he’ll start to remember, and he rises from the couch and calls out to Michael urgently.

We’ll see how it all goes down in the end, but it certainly looks like we’re in for an exciting rest of the week on GH, so be sure to stay tuned! We’ll be sure to give you updates as more GH news comes in, and don’t forget to check back with CDL for the latest General Hospital spoilers, recaps, and news.