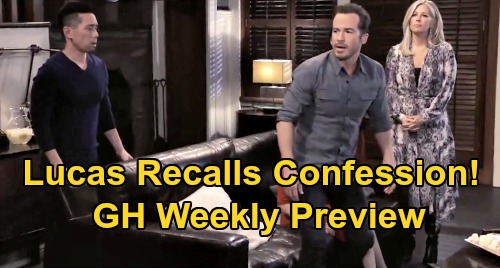 General Hospital (GH) spoilers new preview teases that viewers are finally going to get to see the moment they’ve been waiting for – the big reveal about Wiley Cooper-Jones’ (Theo and Erik Olson) true identity. It’s been a long time coming, and with a lot of twists and turns along the way.

But it finally seems that time will be up for Brad Cooper (Parry Shen), as this week’s, February 17 to February 21, General Hospital preview promo promises that Lucas Jones (Ryan Carnes) will remember Brad’s confession from the night of their car accident.

The promo awesomely recaps the baby switch storyline, from the moment that Brad and Lucas found out they were adopting the original Wiley, through Wiley’s tragic death from sudden infant death syndrome, then to Brad’s baby swap with Nelle Benson Archer (Chloe Lanier) and the rest.

It’s been quite a ride for viewers, and for Brad, who’s been in a state of tension and nonstop stress since the original Wiley’s death.

Well, the promo ends with some scenes that will be coming up during the week of February 17-21. During those scenes, various people are gathered in the Corinthos living room, including Carly Corinthos (Laura Wright), Brad, Lucas, Michael Corinthos (Chad Duell), Sasha Gilmore (Sofia Mattsson), Bobbie Jones (Jacklyn Zeman), and Julian Jerome (William deVry).

Lucas seems to be having flashbacks from the moments leading up to the accident, and Julian asks him if everything’s ok. Lucas then says that he thinks he’s remembering something from the night of the crash, prompting a terrified look from Brad.

General Hospital spoilers say that in fact it will be Nelle who reveals that Wiley is in fact Jonah and her baby – so this could be a but of a fakeout.

At the end of the promo, Lucas yells out, “Michael!” Michael turns around, and it looks like Lucas is about to tell him what he’s just remembered. If he does go through with it and tells Michael his memory, it will certainly be an explosive scene.

Of course, what happens from here is anyone’s guess. Will Lucas voice Brad’s confession that Wiley is really Michael and Nelle’s son? And if he does, will anyone believe it at first? It will be interesting to see how this plays out, but we should note that many of the key characters in the storyline are present in this scene, so it seems like this would be the ideal setting for the truth to come out.

It would be just like Brad to try to downplay Lucas’ memory and say that he’s probably confused and misremembering, but Lucas seems pretty adamant in the promo as he’s calling out Michael’s name. Besides, Lucas has been having the feeling that Brad was leading up to a big confession in the car anyway, so he probably won’t discount what he remembers, no matter what Brad says.

Fans have been steadily responding to the preview on social media, with a considerable amount of enthusiasm about the big Wiley reveal. One said: “Well…FINALLY!!!! Excited to see Michael in dad mode, Carly in grandma mode, and Josslyn in auntie mode. #JonahIsWiley.” And another said: “I can’t wait for Michael to have his baby back, but I’m sad for Lucas.”

Another fan wondered about the effect on another character who doesn’t seem present during the pivotal scenes shown in the promo – Willow Tait (Katelyn MacMullen). This person said: “And Willow finally can mourn the death of her baby, for the second time she will have to let go of him.”

Of course, another person not shown in that pivotal group scene is Sonny Corinthos (Maurice Benard), and he’ll certainly have some strong feelings about the big reveal when it happens…especially if it comes out right away that Julian knew about Wiley being Jonah. Sonny will have some strong words (and likely some strong actions) for Brad, Julian, and Nelle when he learns the truth.

At any rate, it looks like GH fans will finally see some big movement this week, as the Wiley saga busts wide open. Are you looking forward to the big Wiley reveal? Keep checking back to CDL for all your General Hospital spoilers, recaps, and news.