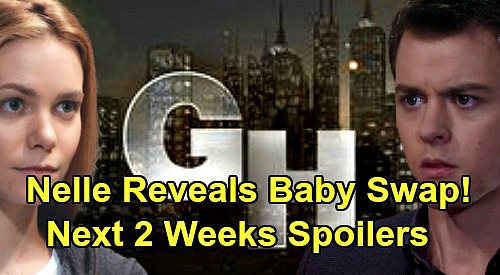 General Hospital (GH) spoilers for the next two weeks tease that some long-awaited shockers are set to hit Port Charles. During the week of February 17-21, “Wiley Cooper-Jones” (Erik and Theo Olson) will be exposed as Jonah Corinthos.

Nelle Benson Archer (Chloe Lanier) will put a plan in motion that finally lets the truth explode, so Michael Corinthos (Chad Duell) will learn he’s been deceived all this time.

The same goes for Lucas Jones (Ryan Carnes), who was lied to by the other baby swapper in this scenario. Brad Cooper (Parry Shen) will have some explaining to do, but what can he really say? There’s nothing that’ll make this better for him, but Brad will probably refuse to go down alone. GH fans can expect Julian Jerome (William deVry) to face backlash for all this pretty soon.

General Hospital spoilers say Sonny Corinthos (Maurice Benard) will put someone on notice. A stern warning will be delivered, so that could be to Julian, Brad or both. As for Nelle, she’ll exit discreetly – which could mean she’ll make a brief getaway.

Fortunately, Michael will be successful in accomplishing something, so that could line up with him stopping Nelle’s escape. Regardless, Nelle won’t be leaving Port Charles behind at this point. Nelle will remain for more drama, which is good since there’ll be a lot of it!

On another note, Curtis Ashford (Donnell Turner) will grill Jordan Ashford (Briana Nicole Henry) and get ripped into as a result. Although Curtis will be curious about whatever Jordan’s hiding with Marcus Taggert (Real Andrews), Jordan probably won’t offer any updates.

Instead, Jordan will likely urge Curtis to back off and let her handle this. This is Jordan and Taggert’s problem, so Jordan won’t want Curtis getting mixed up in it. Jordan will eventually meet with a former foe, so that could involve a prison meeting with Cyrus Renault (Jeff Kober).

It appears Jordan, Taggert and Bob Massicotte (Randy J. Goodwin) may have put Cyrus in prison for a crime he didn’t commit. Other General Hospital spoilers say Carly Corinthos (Laura Wright) will cap off the week fretting over “Wiley” aka Jonah. She’ll struggle to know what’s best for “Wiley,” but it probably doesn’t matter what Carly thinks.

Michael will undoubtedly demand his son back, so expect some precious Daddy time during the week of February 24-28. Monica Quartemaine (Leslie Charleson) will also receive some excellent news, so perhaps that’ll tie in with “Wiley,” too. She should be thrilled that Michael’s son is alive after all.

Back with Julian, he’ll have to deal with Sam McCall’s (Kelly Monaco) fierce wrath. Sam will likely blast Julian for his role in covering up the baby switch, especially since Lucas Jones (Ryan Carnes) will be suffering so much.

Nelle will stand her ground, which indicates she’ll still be around and will be as stubborn as ever. Carly will go up against Nelle, but this Corinthos will end up deeply troubled. She may worry Nelle, who is after all the boys mom, will stay out of prison somehow and try to go after “Wiley.”

Over with Alexis Davis (Nancy Lee Grahn), she’ll reflect on what could’ve transpired. Alexis might find herself thinking about Dr. Neil Byrne (Joe Flanigan) and wishing things were different.

Finally, Josslyn Jacks (Eden McCoy) will make a stunning discovery. Since Cameron Webber (William Lipton) and Trina Robinson (Sydney Mikayla) will go out on their first date, Joss could get jealous once she spots them.

General Hospital spoilers say some gripping scenes are on the way. Don’t miss all our updates and news as these GH storylines take some crazy turns.