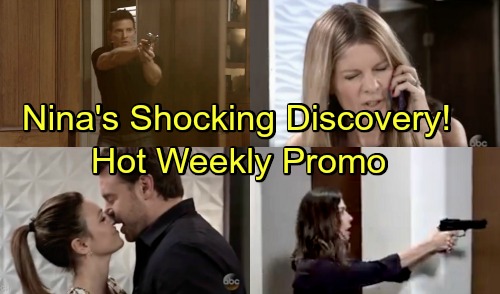 General Hospital’s new weekly promo video teases that we’re in for a bumpy ride this week. This promo is quick and full of action, so hold on! First, we see more of the mystery patient at Ferncliff, who appears to be Kevin (Jon Lindstrom) being held against his will by Ryan (Jon Lindstrom). The patient is shown being forcibly restrained in a straight jacket, which means things aren’t getting any better for him.

Next, Jason (Steve Burton) is shown busting into a room with his gun drawn and Carly (Laura Wright) looks stunned. It certainly looks like something major is going on, and Jason looks like he means business. It could have something to do with Mike (Max Gail), who also shows up in the promo looking quite distressed.

Perhaps Mike is having an Alzheimer’s related meltdown, and Jason is rushing in, not knowing what is going on. General Hospital spoilers say that Jason and Mike will soon have a heart-to-heart chat, so it could be related to these promo scenes.

The subject of Nina’s (Michelle Stafford) baby takes center stage in this promo, with Valentin (James Patrick Stuart) asking Madeline (Donna Mills) point blank what happened to Nina’s baby, and Madeline looking guilty as sin. Valentin certainly isn’t going to let up on this issue, as it’s probably his only remaining chance to get back into Nina’s good graces.

Valentin promised Nina that he’d win her back in 30 days or else she could go ahead with a divorce, and he’s nearly at the end of his time period. He’d better act fast!

There’s a bit of a recap of Drew (Billy Miller) and Margeaux’s (Elizabeth Hendrickson) conversation about when Margeaux planted a kiss on Drew, and the two are shown in a future, more mutual lip lock. It looks like romance is in the air, although viewers know that Drew still has his suspicions about Margeaux’s motivations for pursuing him. She may just be using him to get dirt on Sonny (Maurice Benard) – and if so, Drew’s bound to find out!

Next, we see Anna (Finola Hughes) drawing a gun with Finn (Michael Easton) at her side. It looks like the action is heating up with these two. But where did Anna get the gun? Did she and Finn overpower their captors? We’ll see just how long they keep the upper hand, as whoever is behind their kidnapping really wants Finn to cure Cassandra (Jessica Tuck). Chances are, Anna and Finn will remain captive for a while.

Kim (Tamara Braun) is also shown briefly, giving Elizabeth (Rebecca Herbst) a concerned look. What could this be about? It’s possible that it’s related to Nelle (Chloe Lanier) and the baby switch. Kim could be the key to busting the baby switch scheme wide open if she discovers something unusual with “Jonah’s” autopsy or perhaps with Nelle’s follow-up exam.

Finally, the promo concludes by showing Nina getting some shocking news via phone. Could this be related to her baby that actually survived while she was in a coma all those years ago? Perhaps Valentin wants to meet and share some updates. Or is she getting other news?

It looks like a lot is going on in Port Charles this week! Be sure to stay tuned for all the drama. We’ll give you updates as other news comes in. Stay tuned to the ABC soap and don’t forget to check CDL often for the latest General Hospital spoilers, updates, and news.