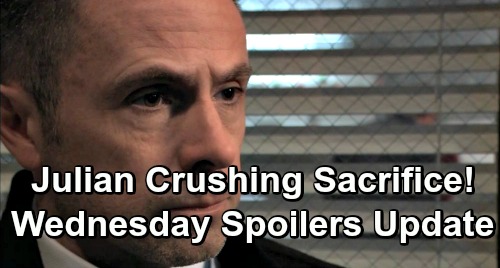 General Hospital (GH) spoilers update for Wednesday, January 2, tease that Jordan Ashford (Briana Nicole Henry) will ponder the latest murder in Port Charles. She’ll be summoned to take a look at Peyton Mills’ (John Patrick Jordan) corpse, which was just found on the Metro Court terrace. Jordan will realize she needs to step up her efforts to catch this serial killer.

Of course, Ryan Chamberlain (Jon Lindstrom) also left plenty of blood splashed in another location. Peyton’s screening room was a red mess by the time Ryan was finished with it.

While the cops hunt for clues at both sites, Lulu Falconeri (Emme Rylan) will take matters into her own hands. She’s faced some opposition from Ned Quartermaine (Wally Kurth), but she won’t let that stop her from poking around.

Ava Jerome (Maura West) will be surprised when Lulu stops by. Lulu will certainly express her condolences over Kiki Jerome’s (Hayley Erin) death, but there’ll be more to this visit.

General Hospital spoilers say Lulu will fish for any info that could help. She may note that Kiki’s killer knew enough to frame Dr. Griffin Munro (Matt Cohen). Lulu will sense that this threat is closer than anyone thinks.

Ava will be quite shaken after this intriguing meeting. Perhaps it’ll reignite her anger and convince her that vengeance needs to happen fast. Over with Kim Nero (Tamara Braun), she’ll get a push from Drew Cain (Billy Miller).

He’ll insist that Julian Jerome (William deVry) could use Kim’s attention. Drew won’t want Kim cooped up at GH all the time, so he’ll urge her to go see her beau.

Meanwhile, Julian will determine that Kim belongs with Drew. They share a son who happens to be fighting for his life. Oscar Nero (Garren Stitt) would undoubtedly be ecstatic over his parents’ reunion. He’s wanted it for a while now, so Julian will hope he can give it to him.

After spotting that kiss and seeing the “Krew” connection, Julian will choose to set Kim free. He’ll use a lame excuse to break up with her, so she’ll take this harder than he anticipated. Nevertheless, Julian will maintain that parting ways is what he wants. That’s not exactly true, but Julian will do his best to sell it.

Across town, Kristina Corinthos-Davis (Lexi Ainsworth) will distract herself from her Valerie Spencer (Brytni Sarpy) regrets. She’ll achieve that by committing to a major transformation. Kristina will look within and adopt all the DOD practices she can. She feels a real sense of acceptance from Daisy (Kelsey Wang) and everyone else in the community.

This cult may seem to be filled with kindness, but darkness is lurking under he surface. Kristina’s going to be in over her head soon, so Sam McCall (Kelly Monaco) and Alexis Davis (Nancy Lee Grahn) will grow fearful.

They’ll work to save Kristina from the craziness, but Kristina’s stubborn streak could be a problem. General Hospital spoilers hint that some cult chaos will erupt down the road, so stay tuned.