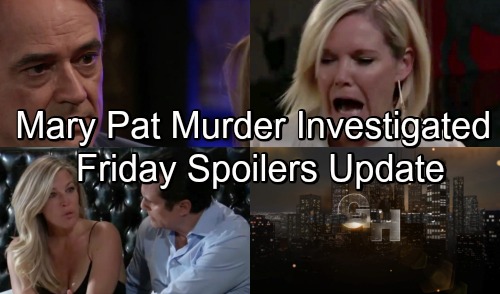 General Hospital (GH) spoilers for Friday, November 2, tease that Griffin (Matt Cohen) and Kiki (Hayley Erin) will address their Ava (Maura West) issues. It’s clear that Ava’s clinging to her grudge, so Griffin will feel responsible. He’ll worry about being the reason for Ava’s rift with her daughter, but Kiki won’t want him to sweat it. She’ll argue that Ava’s the only one who can change her behavior.

Elsewhere, Nina (Michelle Stafford) will find out something upsetting. She’ll learn Ava’s been trying to manipulate Sasha (Sofia Mattsson), so she won’t like it one bit. Nina won’t want Sasha to fret about anything. She’ll promise to deal with Ava so Sasha can settle in Port Charles and be happy. The last thing Nina needs is for Ava to cause problems and drive Sasha out of town.

Meanwhile, Carly (Laura Wright) will be rattled over her apple-bobbing disaster. She was all set to dive in when Mary Pat’s (Patricia Bethune) head rose above water. After the crowd’s panic dies down, Jordan (Briana Nicole Henry) and Chase (Josh Swickard) will start asking questions. They’ll hope they can retrace Mary Pat’s steps and figure out who had a motive.

Ryan (Jon Lindstrom) aka “Kevin” will mention speaking with Mary Pat earlier. He’ll suggest that he last saw her at The Floating Rib, but that’s not true. Ryan and Mary Pat actually had a secret meeting down by the docks. Once Ryan realized Mary Pat posed a threat, he decided to get rid of her for good.

However, Ryan will play it smooth and point the cops down the wrong trail. An oblivious Laura (Genie Francis) will be stunned by the horror of it all. She’ll think this whole incident is a real head-scratcher. Laura won’t get why someone would want to murder this random nurse from Ferncliff.

Carly will be equally perplexed over Mary Pat’s sudden death. She’ll return to Sonny (Maurice Benard), so he’ll provide comfort to his distressed wife. Mary Pat certainly wasn’t Miss Congeniality, so Carly will assume she had plenty of enemies. Still, she’ll think murder was awfully extreme. Carly will ponder who hated Mary Pat enough to do away with her.

Other General Hospital spoilers say Ava will have a major meltdown. She’ll shriek over something she sees at the gallery. If GH wants to get really gruesome, there’s a chance the rest of Mary Pat’s body will be in there. After all, we only saw her head!

Then again, this could be a dream sequence or some Halloween hoax. Ava has enemies as well, so she might be the target of a cruel prank. Regardless, Ava will be a nervous wreck thanks to her discovery.

Back with Chase, he’ll also find something totally horrific. It sounds like General Hospital will cap off a week of Halloween shockers with more gore! We’ll give you updates as other GH news comes in. Stay tuned the ABC soap and don’t forget to check CDL often for the latest General Hospital spoilers, updates and news.