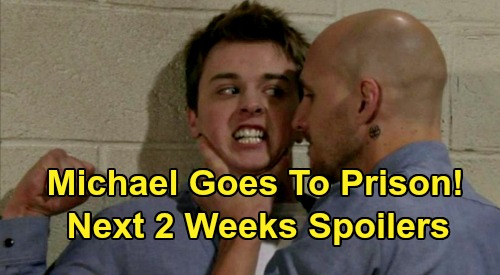 General Hospital (GH) spoilers for the next two weeks tease that some startling scenes are on the way. Sonny Corinthos (Maurice Benard) has plenty of children to contend with in Port Charles – and they’ve all got their issues! Of course, Sonny has issues of his own, which makes the Corinthos family an interesting one.

The theme over the next couple weeks will concentrate on Sonny’s role as a dad. During the week of June 29-July 3, GH takes us back to 2010 and Sonny’s shocker. Sonny plots to kill “Dominic Pirelli” aka Dante Falconeri (Dominic Zamprogna), but he doesn’t realize Dante’s his flesh and blood.

After confronting “Dominic” for betraying him and being a cop, Sonny pumps a bullet in him. Olivia Falconeri (Lisa LoCicero) is a mess as she yells about Sonny shooting his own son.

Next, another episode from 2010 features Kristina Corinthos-Davis (Lexi Ainsworth) and her difficult therapy session with Sonny. Kristina struggles to help Sonny see that abuse comes in many forms – not just physical.

General Hospital’s also throwing it back to 2014, which is when Michael Corinthos (Chad Duell) pulled a gun on Sonny over AJ Quartermaine’s (Sean Kanan) demise.

Michael’s reached his limit with Sonny and wants him to pay for killing AJ, but he eventually puts the gun down and lets Sonny be taken into custody instead.

GH is delivering a 2015 classic as well, so look for Michael’s anger to subside a bit. Michael earns some kind words from thankful Sonny and Carly Corinthos (Laura Wright) as he gives Avery Corinthos (Ava and Grace Scarola) back to her father. However, Michael also gives Sonny a plea to do right by Avery since she’ll grow to look up to him.

Morgan Corinthos’ (Bryan Craig) 2016 suicide plan caps off the week, but Sonny comes to his son’s rescue. It takes some work, but Morgan backs down after Sonny threatens to jump from the GH rooftop with him.

The week of July 6-10 will keep this theme of Sonny and his children going strong. In a powerful episode from 2008, Michael lands at GH after getting shot. Sonny battles guilt since his son took the bullet meant for him, so this encore should be a real tearjerker!

A 2010 episode is up next as Michael makes a stunning admission. Michael confesses to killing Claudia Zacchara (Sarah Joy Brown) in an attempt to protect Josslyn Jacks. That leads to another 2010 classic, which features Michael’s judgment day. Michael is sentenced to prison, which brings some devastating moments for his family.

After Kristina’s injured in a 2011 bus crash, Sonny pays her a visit at GH. Kristina and Sonny’s relationship also gets the focus in a 2016 episode, which features Kristina opening up to her father about Parker Forsyth (Ashley Jones).

After Sonny pushes for answers about the older woman he saw Kristina kissing, Kristina comes clean and gets reassurance that her father loves her no matter what.