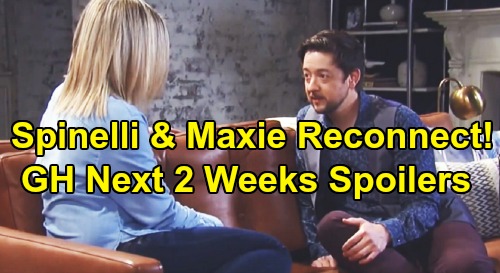 General Hospital (GH) spoilers for the next two weeks tease that chaos will be unleashed in Port Charles. During the week of January 6-10, Nikolas Cassadine’s (Marcus Coloma) return will create plenty of buzz at Wyndemere. He just burst in carrying wet Ava Jerome (Maura West), so Laura Webber (Genie Francis) and Lulu Spencer (Emme Rylan) will get choked up over a reunion they’d never thought they’d have.

Valentin Cassadine (James Patrick Stuart) will feel like the rug’s been pulled out from under him. He’ll learn that Nikolas has the codicil, which strips Valentin of the Cassadine estate. There’s also the matter of Nina Reeves’ (Cynthia Watros) deception and plot to bring him down. Valentin will definitely face some lows in the coming episodes.

Over with Robert Scorpio (Tristan Rogers), he’ll get a visit from Jason Morgan (Steve Burton). Jason will likely hope Robert can help him out with this Sam McCall (Kelly Monaco) situation – or at least help him rev up his plan to destroy Peter August (Wes Ramsey).

As for Anna Devane (Finola Hughes), she’ll find herself in the right place at exactly the right moment. It sounds like Anna could make a discovery or save someone in need. Next, Julian Jerome (William deVry) will get grilled by Sonny Corinthos (Maurice Benard).

Now that Sonny knows Julian’s hiding things, he’ll want to put some fear in his enemy and deliver a threat or two.

Michael Corinthos (Chad Duell) will get some concerning news soon, so that may tie in with what Sonny knows. He may worry when he hears Nelle Benson’s (Chloe Lanier) name came up. There’s always trouble brewing when it comes to Nelle!

During the week of January 13-17, Damian Spinelli (Bradford Anderson) will reconnect with Maxie Jones (Kirsten Storms). There’ll be a lot to catch up on due to Nik’s comeback and all the drama that’ll cause around town.

Meanwhile, Harrison Chase (Josh Swickard) will be summoned to break up a confrontation. He’ll get stuck in the middle of a fierce faceoff, so don’t miss all the action.

Other General Hospital spoilers say Tracy Quartermaine (Jane Elliot) won’t be shy about voicing her opinions. She’ll have an important reminder for Ned Quartermaine (Wally Kurth) about their family legacy.

Tracy will also try to find common ground with Olivia Quartermaine (Lisa LoCicero), but she’ll wind up clashing with Michael. He’ll get blamed – most likely after Quartermaine infighting breaks out.

Elsewhere, Brad Cooper’s (Parry Shen) in for the harsh truth and more warnings from Julian. Sonny will also make some road trip plans, which might tie in with Mike Corbin (Max Gail).

Gladys Corbin (Bonnie Burroughs) will express her support over Sonny’s choice, so he may decide to let Mike go – but not before hitting the road with his dad one last time.

Then again, Sonny’s road trip could involve a mission of some sort. He’ll be unsettled over something a little later, so General Hospital fans will want to stay tuned. We’ll give you updates as other GH news comes in. Stick with the ABC soap and don’t forget to CDL often for the latest General Hospital spoilers, updates and news.