General Hospital Spoilers: Peter’s Fate Revealed – Jason Forced To Resort to Murder or Can Anna Save Son from Death? 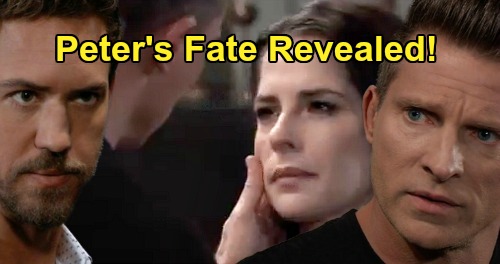 General Hospital (GH) spoilers tease that Jason Morgan (Steve Burton) won’t let Peter August (Wes Ramsey) get away with his actions. Peter has caused plenty of drama for Sam McCall (Kelly Monaco) and there could still be more to come. Will Jason murder Peter before Anna Devane (Finola Hughes) realizes Hamilton Finn (Michael Easton) is right about his guilt?

Jason Was Gone for Five Years

General Hospital fans know Jason was separated from his family for five long years. He was kept away from Sam and Danny Morgan (Porter Fasullo), so that’s always going to be a factor. Peter’s the reason that Jason was gone for so long and is likely the reason he disappeared in the first place.

In fact, Peter’s still getting in the way of “JaSam’s” love story. Jason and Sam don’t want to spend any more time apart, but Peter’s recent setback forced them to do just that. Peter was determined to avoid getting busted, but he’s poking the ultimate bear here: Jason. There’s a good chance Peter’s going to regret that.

Loyalty Only Goes So Far

Jason knows that Peter could be Robin Scorpio Drake’s (Kimberly McCullough) brother, so that matters here. Jason also cares about Anna and has saved from being shot by Peter before. There’s a certain level of loyalty, but it only goes so far. GH viewers can always expect Jason to put Sam and the kids first.

Peter is threatening Jason’s life with Sam, the woman he missed out on five years with already. Jason and Sam have been through too much to let Peter separate their family now. Loyalty to Robin and Anna certainly doesn’t surpass Jason’s loyalty to his family. Anna’s refusal to see Peter’s faults could very well get him killed.

Apparently, Peter can’t understand the concept of keeping your friends close and your enemies closer. If Peter were smart, he’d want Sam and Jason to be happy. By working against “JaSam,” Peter is making himself a target and relying on Anna to save him.

Peter should’ve known that antagonizing Jason and Sam would only lead to his downfall. His attempt to cover up his past connections to his hired hands is nothing that Damian Spinelli (Bradford Anderson) can’t uncover.

Spinelli will do anything to help his friends and protect Maxie Jones (Kirsten Storm). General Hospital spoilers point to Spinelli coming through with some crucial updates and news soon.

Finn has left Anna for now because of her refusal to see Peter’s bad side. He laid some hard truths on Anna before he moved out of her house with Violet Barnes (Jophielle Love). Will Anna realize Finn is right in time to save Peter from death? Will Jason take Peter out before Anna decides he’s safer in prison?