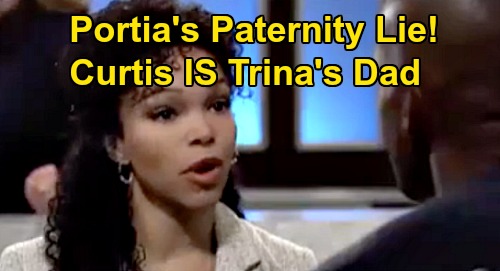 General Hospital (GH) spoilers reveal that Curtis Ashford (Donnell Turner) could be in for a big surprise down the road. Since the math checked out, Curtis decided it was time to have a little chat with Portia Robinson (Brook Kerr). It was obviously possible that Curtis was Trina Robinson’s (Sydney Mikayla) father, so he pushed Portia for honesty.

Portia was quite calm and reassuring about the whole thing. After Portia confirmed that Marcus Taggert (Real Andrews) was indeed Trina’s dad, Curtis confessed he was relieved. Jordan Ashford (Briana Nicole Henry) felt the same way when Curtis offered updates later. Trina’s a great gal, but Jordan and Curtis believe they’ve dodged a bullet. Have they really though?!

Let’s consider the story GH has presented here. Portia lied to Curtis about being single while Taggert was undercover, but she claims she got pregnant after Taggert returned from his mission. Of course, we can’t ignore the fact that Portia is by her own admission a LIAR. Why would we believe anything Portia says now?

Plus, Portia was been pressuring Trina to ease up on Curtis. General Hospital viewers know Trina still blames Curtis for Taggert’s death – which is another clue on its own. Soaps often establish some form of conflict between a parent and long-lost child before it’s revealed. It’s the perfect setup for when the bomb drops, and they’re forced to accept they’re family.

Portia may be pushing Trina to let go of her anger for more than one reason. She reminded Trina that Curtis saved her life and was just honoring Taggert’s wishes. Portia also noted that hatred wasn’t good period, so she’s hoping Trina will ditch the rage.

Does Portia secretly hate the idea of Curtis facing his own daughter’s wrath? Even though Portia may not want to upend either one of their lives, she might want them to be on better terms. Portia may view that as a nice compromise: Trina can still believe Taggert was her dad, Curtis doesn’t have his world turned upside down and everyone can move forward in peace.

Regardless, everything is just a little too neat and tidy. Why give Curtis this connection to Portia and make it so he COULD be Trina’s father? Just for one episode where they address it and there’s no drama at all? We don’t think so! It sounds more like Portia is lying and setting herself up for trouble.

Trina could face a life-altering shocker at some point. If she hates Curtis now, we probably haven’t seen anything yet! That hatred will only grow stronger if Trina realizes her beloved dad wasn’t her biological father. Trina may find a way to blame Curtis and give him another hurdle to overcome.